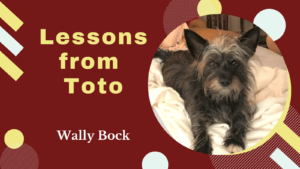 Sometimes, when we’re out walking, Toto and I encounter other people and their dogs. When that happens, I usually stand off to the side and tighten my grip on Toto’s leash. Toto is a rescue. That means that I can’t accurately predict her behavior in many situations. I can’t tell if this time she’s going to be aggressive with another dog or not. She sees, senses, and remembers things I don’t.

“Rescue” means her life before we got her wasn’t so great. We know she was eating out of dumpsters and developed an enduring taste for pizza crusts. There’s a lot we don’t know.

Toto reacts to situations, in part, based on her experience before we got her. The people you work with are like that, too. Think of it as “the ghost of bosses past.”

Even if you don’t understand it, other people do things for their reasons. Sometimes, you can figure out those reasons and help them change behavior. Most times, you can’t.

What makes this tricky is that often, people can’t explain their behavior themselves. Sometimes, the reason they’re wary or they don’t trust you or their teammates is so far below the surface that it’s unavailable for discussion.

Toto Is A Smart Dog

The thing about smart dogs and most people is that they don’t want to just sit around. The last dog we had before Toto disdained toys. If you threw a ball, he gave you a look that said, “Why did you do that? You’re just going to have to go get it.” So, when we got Toto, we really didn’t have any dog toys.

Most people are like Toto. They want to be doing something. If you trust them with good options, they’ll usually take them.

This can work to your advantage. People are good at some things and not so good at others. Your team will be more productive if you make use of that. Give people as much work they like as possible. Spread the scut work of the team around so that no one must do it all.

Toto is changing. I’ve taught her to do several things. When it’s time for us to go for a walk she knows exactly what to do.

Toto has figured out a lot of other things on her own. I walk Toto a lot when I’ve got a thorny problem to work out. Walking is great for that. Toto has learned how I behave when she’s likely to get a walk. She’ll show up in my office and act like she thinks it would be a great time to go for a walk.

I have no idea what I do that triggers that behavior. She’s learned when I’m likely to do something that she really enjoys.

Toto’s developed some relationships, too, and not just with my wife and me. We have a semi-outdoor cat, Rooster, who came with the house. At first, things between Toto and Rooster were tense. Now, most of the time, they share space and attention like old friends.

Your people grow and develop the same way. They’ll learn some things from you and from their current job. They’ll also figure a lot of things out for themselves. And their relationships with you and other team members will change, too.

Most of that is out of your control. The best you can do is create an environment where good things are more likely to happen.

People sometimes behave based on their previous experience.

Sometimes, people can’t explain why they act in a certain way.

People are good at some things and not so good at other things.

People change. Don’t expect them to stay the same.

People learn from you, from others, and from experience.

You can’t control people. The best you can do is create an environment where good things can happen.

Dear Author,
As European, born in a country like Italy, with a 2K years of humanistic culture, I have again to increase my conscience of Our differences (I would say superiority, but its not really in my humble character) respect to the “Coaching”, PseudoScientific american fake culture, made of poor PseudoPsychological and undemonstrated anedoctic basis. Your piece could be published in the 60’s Readers Digest. It’s surprising the States can still take in their hands the dominant thinking, anyway in a world that is becoming poorer and poorer in terms of complex thinking.And offer much prosperity to pages like Yours.
As a Person, I’m simply disgusted of how You, boss, can compare the dog and human psychology to derive rules for your Leadership. Anyway I always fought for the culture freedom, and against any censorship, but your lines can succeed only in the miserable brains surviving in your Country. Otherwise Trump had no reasons to exist.
Sincerely
Alfonso Marini
20097 San Donato Milanese
Italy