Personal Development: A Learning Journey is Its Own Reward 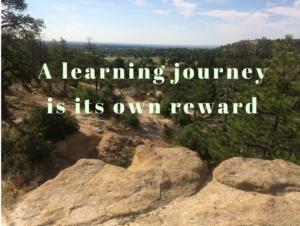 For several years I made do with imagining and daydreaming. Then, in my late 30s, I had the time and the money to do something to make those opera-singing dreams come true.

I engaged a voice coach who’d had a fine career in opera before all the travel required got him down and he started his coaching career. He wasn’t just a good coach, he was a great guy, and we became good friends.

Over a couple of years, he helped me develop good breathing techniques and gave me many vocal exercises. We studied the scores and how arias fit into the dramatic story of the opera. We listened to recordings of great singers. I learned to read music.

Even with all my hard work and excellent coaching, it became apparent that I would never rival the great Herr Frick. “Okay,” I thought, “I’ll work really hard and get to where I can sing a bass aria in a local amateur opera production.” That didn’t work either. I never got good enough to sing bass solos in church.

My quest to be an opera singer stopped the night that my coach and I were having a beer after my session.

Despite my really hard work and all his coaching and help, I was about as good as I was going to get when it came to singing. The fact is, that you can’t be good at everything. At least, you can’t be as good as you want to become.

No amount of work or practice would raise my performance level as an opera singer to where I wanted it to be. That doesn’t mean that I didn’t get anything out of the experience, though.

I was a better singer than when I started. I’d learned a lot about opera, which I love. During the years I was trying to become a great singer, I wrestled with texts and plots and interpretations in ways I never would have otherwise. The things I learned about breathing in performance translated directly to my work as a professional speaker.

Once we both decided that I would never become an opera singer, my coach put effort into helping me become a good member of a church choir. We worked a lot on harmony. And, I learned not to sing too loud, so I wouldn’t throw anyone off key.

The fact is that you can get better at almost anything, but excellence is usually the province of both talent and hard work. That shouldn’t discourage you. Most of us have so much upside on so many things that it makes sense to try to develop the skills you would really like to achieve excellence at.

Pick something you want to learn. Get help. Do the work. Celebrate your successes. When things don’t work out the way you want, learn something from the experience. The learning is its own reward.

The story of my quest to be an opera singer is only one part of my story. I’ve learned to do a lot of other things well in my life. I’ve learned to fly an airplane and speak a couple of languages. Excellence eluded me in both those endeavors. I’ve learned to be a good writer and book-writing coach. That degree of excellence lets me work on important projects with smart and passionate people.

Your experience will be much the same. The same amount of work that makes you excellent at one thing may not be enough at something else, no matter how much you love it. That’s just the way it is. And there’s always more to learn.