Lessons From My Father The Preacher About Getting Better 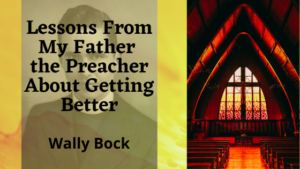 My father was a Lutheran pastor. He didn’t have career goals like the ones we commonly write about. But early on in his career, he decided that he would become a great preacher. That led to a regular Sunday ritual during the years I was growing up.

Every Sunday after the last service, we had a family dinner. At every family dinner, we chatted about all sorts of things, until my father said, “What did you think of today’s sermon?”

At that point, my mother said the same thing every week. “I think it was the finest sermon your father ever preached.” That fired the starting gun for a lively discussion. My father, my mother, my sister, and I debated what was good about Dad’s sermon and how it could be better.

He never achieved those decades of unbroken improvement my mother talked about. But he became a great preacher, and year by year, he got better. Here are five things he did to make himself better. You can do them, too.

Dad thought the best way to learn something was to teach it. So, he started holding clinics early in his career. At first, only his friends came. Eventually, more experienced pastors came, too. Dad said preparing and presenting those clinics was a great learning experience. He also said he learned a lot from the participants.

He thought it was funny that only the best preachers came to the clinics. They wanted to improve. The worst preachers never came. They thought they were already good enough.

Learn from The Experts

Dad was constantly on the lookout for good things that other preachers did. When he visited another church, he took notes during the sermon. If he heard or heard about a great sermon, he wrote to the preacher and asked for a copy of the sermon or the sermon notes. He loved talking shop with other preachers.

Go Outside Your Field for Ideas

Dad didn’t only look to other preachers for ideas. He went to hear motivational speakers. He listened to political speeches and radio addresses. When he listened, he always took notes.

Go to The Gemba

Dad gave interns and preaching students the following advice. “You won’t find important things to preach about sitting in your study. But, if you call on your parishioners during the week, you’ll know what to preach about on Sunday.”

The Japanese call that “going to the gemba.” It means going to the source, going where the problem is. It’s why management by walking around works. One of my early bosses had a sign on his wall that said, “Nothing important happens here.”

How Do You Measure Success?

He wanted to be a great preacher by his own standards. He knew whether he did what he wanted to on any given Sunday. He sought feedback from others on the content. If he did a fine job and knew it, that was enough.

He didn’t want to be “the greatest preacher” either. Dad’s idea was that you couldn’t know enough and hear enough preachers enough times to even get a clue about who the best preacher was. He wasn’t even sure there was such a thing.

But he said you can always learn from other preachers. There are other people who do things better than you and you can watch them, talk to them, and learn.

His friend Ross Hidy was always on his list of preachers he learned from. Dad said there were many great preachers like Ross to learn from. But there was no “greatest” preacher.

Sometime in the late 90s, we had a discussion of what I thought was one of his best sermons ever. He reflected on what I said for a minute. Then, he said this, “You know, I couldn’t have preached that sermon 10 years ago.”

Perhaps it wasn’t 50+ years of unbroken improvement, but it was always improvement. I think my father achieved his goal. I think he became a great preacher.

He would probably amend that. He would agree that he was better than he was. But he was constantly searching for how to become even better.

If you want to get good at anything, make it a lifetime quest. Learn by teaching. Learn from the experts. Go outside your field for ideas and go to the source. Don’t measure your success by accolades or lack of them. Don’t measure success by comparison with others. Get a little better every time.

Thanks to my friend Laurie Anderson. Her line, “Just getting better is the new goal post” sparked the trail of thought that ended at this post.

Thanks for putting this together Wally. What a great Dad you had, and what a great example he showed you. Thanks for sharing his father’s heart and inner passion with us. I’ve taken some notes, and tried to breathe in from afar his example.

Thanks for the kind words, Michael.