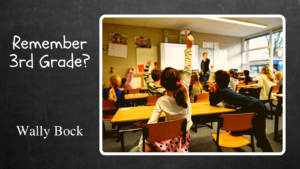 I went to 3rd grade in a small town during the 1950s. Mrs. McKinley was my teacher. She was one of the “tough” ones. I was eight and it was an important experience for me.

3rd Grade in the Fifties

Everything was regimented and rule-bound in our classroom. We had assigned seats where we were supposed to sit with our backs straight, our hands folded, and our feet flat on the floor. If you wanted to go to the restroom, you had to raise your hand and get permission. Then, the teacher gave you a hall pass. If you were caught in the hall without a hall pass, bad things would happen. I assume they were too ghastly to describe.

In my 3rd-grade class, we did everything as a group. We learned our lessons, went to recess, lunch, and school assembly as a group. We participated in fire drills and duck-and-cover drills together. We did all those as a group. But the only way we were graded was individually.

Creativity was not rewarded. Getting the right answer was. The right answer, in this context, is the answer the teacher already knew when she asked the question.

In the 3rd grade, in the 1950s, that was okay. Today, it’s not. In many ways, if you want to have an effective team, you must get as far from that 3rd-grade classroom as possible.

Give People as Much Control as Possible Over Their Work Life

In the 3rd grade, the teacher had the answer, and your job was to guess it. I wish that were only true in the 3rd grade. Early in my career I worked in a corporation that seemed to work the same way. The only ideas we pursued were ones the boss either had or approved of.

In the 21st century digital economy, you need every brain in the game and as many good ideas as you can get. Go for lots of right answers.

Recognize that most ideas, even the good ones, need work. Instead of sitting around and debating the ideas, try them out to see what works and what doesn’t.

And if you want to get more ideas from your team members, there’s a simple thing you can do. When someone shares an idea, praise them for it. Don’t wait to praise until you’ve gotten approval to try it, then tried it and found that it works. Praise right away.

Too many teams work like my 1950s 3rd-grade classroom.

Give people as much control as possible over their work life.

Go for lots of right answers.

Praise the people who come up with ideas.

Hello Wally, The concept of the article that showed up in my daily Smartbrief on Leadership sounded intriguing. Like you, I am most definitely in the waning period of my career. However, in reading your personal account I was immediately struck by how out of touch with today’s workers and leaders this flashback was. Even referring to your early career days does not give insight to today’s experiences. When I look for guidance, or more appropriately evidence that I might be doing something right, I look for cutting edge research and current trends. My undergraduate degree obtained in the 80’s taught me the basic treatise of your article; we thrive with more autonomy. Sorry if this sounds harsh….just thought i would share my impressions.

Hi Carl. Thanks for adding to the conversation. I’m not sure we differ all that much. The point of the post was that the old model isn’t right for today. We may differ on the point that too many leaders create an environment that mimics my third grade class.

Emphasis on collaboration for rewards.

I had a very similar 3rd grade experience. It was old East School in a midwest town of 10,000. Mabel Snyder was the teacher, strict disciplinarian but a good teacher. It was 1945, the final year of WWII. The building is long gone but the educational systems remained pretty much the same in structure and function up until recently as the shifts in design, curriculum, learning and essential skills began. We are on the cusp of some big changes, and the pandemic has shown where the cracks are. Now the challenges are to innovate and create in order to prepare better for the future, if there is to be one.

Thanks for that thoughtful comment, Gary. I think one good thing that’s happening is the the pandemic has exposed many cracks in the current system.