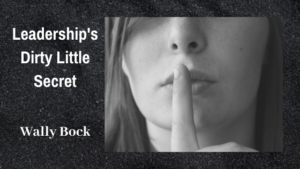 Barry and I started our careers at the same time. Because we went to the same church and lived near each other, we talked a lot about our ambitions. Back then, we both wanted to be big company CEOs. Neither one of us made it.

Fairly early on, I learned the hard way (by getting fired) that I was much more effective in smaller organizations than I was in large ones. Then I learned that I was even better when the small organization was the one that I founded. That wasn’t my original goal, but it was the right goal for me.

Barry’s story was different. He rose quickly in his company, and then his career seemed to stall. We were still connected when he switched companies and started to rise again. Then he was transferred to the other side of the earth and we lost touch.

We ran into each other a few years back in an airport. We both had a lot of time before our flights, so we took the opportunity to have lunch and a couple of drinks and catch up.

It turned out that Barry’s career had stalled out several times. When I ran into him, he was on one of the last business trips before he would retire from a position that was a far cry from his original ambition. I asked him how that happened.

Barry looked down at his drink and ran his fingers slowly around the top of the glass as he thought. Then he looked up.

“There was something important I didn’t learn until it was too late.”

Naturally, I asked him what that thing was. Barry got that rueful look that people get when they ponder something that didn’t go the way they expected.

Barry was good at the vision and the inspiration and all that leadership stuff. The dirty little secret he had to learn on his own and didn’t learn until too late is that leadership is not enough. It was the other stuff that got him.

What got him were the vacation schedules that weren’t filled out on time and people who turned on him after he forgot to send a promised recommendation. What got Barry were the underperformers who didn’t get a shape up or ship out counseling session, and managers who worked on his team that never got help moving up the ladder.

The truth is that leadership is exciting, and it gets a lot of press, but leadership not enough if you want to be a great leader. When you become responsible for the performance of a group, you must lead, but you also have to manage. You have to fill out the paperwork and handle the priorities and juggle the demands and squeeze all the juice possible out of the resources. You’ve got to supervise, too. That’s the part of the job where you help the people on your team succeed in their current job and whatever comes next.

Leadership is romantic and exciting, but it’s not enough. You have to manage and supervise well, too. That’s the dirty little secret.

You don’t get a choice about whether you must do leadership, management, and supervision work. The only choice is how well you do it.

The 347 tips in my ebook can help you Become a Better Boss One Tip at a Time.

Great and inspiring article. I believe the quote below:

“When you become responsible for the performance of a group, you must lead, but you also have to manage.”

is of importance because these days, I notice the trend of people not managing because it becomes too tactical and “gets in the weeds.”

Thanks for the kind words and adding to the conversation.