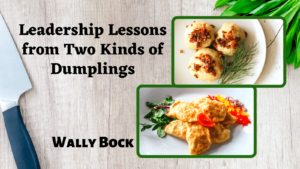 There are probably more ways to make a dumpling than you can count. There’s dough, of course. And there’s filling, but sometimes there isn’t. You can prepare dumplings by baking them, boiling them, steaming them, or frying them. I’m sure I’ve missed some options.

When I was a little boy, my father was pastor of a church formed by the merger of two congregations. As mergers go, it was excellent. The men and women of the church worked together on all kinds of projects. Governance was shared by members of each of the original congregations. Everything was great, except for the matter of the dumplings.

Each of the original congregations were filled with people of German background. Each group had a special recipe for dumplings that they thought was clearly the best in the world. They were proud of their dumplings.

Now, that might not seem like a big deal, but it was a big problem for the pastor. To the end of their lives, my father and mother would refer to that congregation as “The Two-Dumpling Church.”

Walking On a Thin Line

My father didn’t particularly like dumplings, but he knew it was good practice to sample all the dishes at any potluck. In this congregation, though, the dumplings were more than a “dish.” They were a powerful symbol.

At every potluck supper, he made sure to eat precisely the same number of each kind of dumpling. My mother helped by counting the dumplings and letting him know if he’d had too many of one kind.

I was way too small at the time to know what was going on. When I was older, I heard my parents’ stories. The stories were loving and humorous. Then, one day, I flew across the country to give a keynote speech on Monday. I traveled on Saturday. On Sunday I worshipped at a local congregation near a retirement community.

During the service, the pastor asked those of us who were visiting to stand up and share our names. After the service, a woman came up to me. She asked me if my father had been the pastor of the two-dumpling church, though she used its proper name. I said yes, and gave her an update on his health. She said, “I know it’s a long time ago, but you probably know. He really liked our dumplings best, didn’t he?”

Not everything you do as a leader will be grand and glorious.

If you are a leader, everything you do is a leadership action.

Teammates watch you carefully for signs of preference.

Sometimes, you keep the peace by having no public preference.

Sometimes, others will help you walk the thin line.