Leadership: Do it naturally or do it wrong 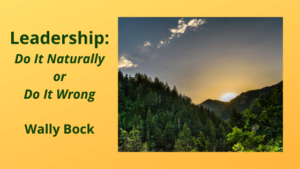 Art Jones was the best leader I ever saw up close. Here’s how one of his peers described him.

“When Art comes to work, it’s like he puts on his slippers. He doesn’t look like he’s doing much, but lots of good things happen.”

If you’re the leader, your work is important. Your challenge is to help the team and team members succeed. Do it well, and your organization, your team, and your team members will all be better off because of your work.

But there’s a temptation, too. The great leadership temptation is to look like a Leader, with a capital “L”. If you do that, a lot of your good work will get lost in that “Capital L” behavior.

If You’re Taking the Credit, You’re Doing It Wrong

When you’re the leader, it’s easy to take the credit. Beware. That’s what bad leaders do. They take credit for good things. They spread any blame for bad things around to team members, outsiders, just about anyone but themselves.

Good leaders do the opposite. When there’s credit, it goes to the team and team members. The only time they call attention themselves is when there’s a problem. Then, they take responsibility.

George Hart was the longest-serving Chief of Police in Oakland, California. He made many important changes with his low-key style, but he never took credit for them.

If the officers in his department made a big arrest, they were the ones talking to the press and taking the credit. When there was a problem, though, Chief Hart showed up and took responsibility. You won’t find a better example of leadership.

If You’re Calling Attention to Yourself, You’re Doing It Wrong

Lao Tzu put it best more than 1,000 years ago. “But of a good leader, who talks little, when his work is done, his aims fulfilled, they will all say, ‘We did this ourselves.’”

If You’re Making Your Technique Obvious, You’re Doing It Wrong

Coaching should be your primary tool leading knowledge workers in the 21st century. You can dilute the power of coaching by calling attention to it.

If you have coaching sessions where it seems like you’re the therapist and your teammate is a patient, you’re doing it wrong. Your team member should pay attention to how things will be different in the future. They can’t do that if they’re paying attention to your coaching style.

There’s a similar temptation with storytelling. Many leaders think that storytelling means storytelling like from a stage. But that’s not how good leaders do it. Good leaders tell stories in the natural flow of conversation. They don’t make the storytelling a big deal, just the message of the story.

If it’s about anything other than the mission and the people, you’re doing leadership wrong.