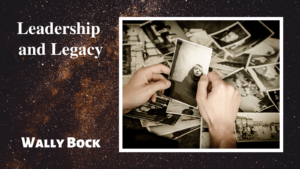 I recently made a trip to Colorado to see my children and grandchildren and meet my great grandson for the first time. The first night I was there, we went to my daughter’s home for dinner. After we finished eating, she asked me to tell several of our family stories. As I did, she recorded them so that my great grandson, Everette, and others would be able to hear them when they wanted to.

My father said that “you’re alive as long as they tell stories about you.” There I was telling stories about him and my mother and my grandparents and my aunts and uncles and cousins. I even slipped one in about my great great grandfather.

Whether you’re a mother or a father or a leader your most important legacy is the stories.

Put Not Your Faith in Honors or Monuments

Captain James Westley Ayers was killed in Vietnam. He was my commanding officer and a superb leadership example. He affected many lives, including mine. The Marine Signal Intelligence School confers the “James W Ayers Honor Graduate Award.” That’s great. But it’s no match for the stories that those of us who knew the man tell each other whenever we get together.

My uncle Jack was the first full-time paid police chaplain in the United States. He served the Albuquerque NM Police Department. The law enforcement building there is the Reverend John A. Price building. That’s great. But it’s no match for the stories. I suspect that most people going in and out of that building today don’t have any idea who my uncle was. Those of us who knew Jack have a vast fund of stories about the man and pastor he was.

Make the stories good ones

The stories people tell about you are the result of the things you say and do. The people you’ve led will tell stories that illustrate the example you set. Your children will regale each other with stories about things you did. Make sure they’re good ones.

Art Jones — An example of what legacy can be

Art Jones was the best supervisor I ever saw up close. When Art was on the job as a police Sergeant, people in his department and surrounding departments told stories about him. They were all good. Art was an example of great supervisor and a great human being.

After he retired, “What would Art think of this?” became the test of any idea or policy suggestion at the police department where he worked. Art died several years ago. We’re still telling Art Jones stories.

Leave a legacy of excellence

My friend, Terry Moore, likes to say legacy is everything you leave but the cash and the keys. When my father-in-law, Jim McGee, died people shared stories about him. Not one of the stories was about his business success. Several were about the opportunities he offered someone. Others were about the little notes he sent with advice, encouragement, and praise. One man told me that he worked for Jim for 24 years and he still had every note Jim sent him.

You don’t get to edit your legacy

Your legacy grows from the things you say and do. It grows from how you respond to challenges It grows from how you make people feel. Every day you have hundreds of opportunities to be legendary, but you rarely know in advance which ones will be remembered. Once those moments pass, they never come back. There are no do-overs in legacy building.

You’re alive as long as they tell stories about you.

Honors and monuments are nice, but stories are better.

Make the stories they tell about you good ones.

Perhaps your example can become a standard of excellence.

You don’t get to edit your legacy.