Hard Things Effective Leaders Must Do 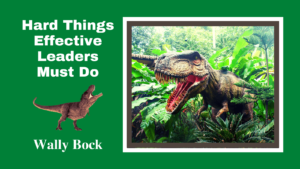 The hard things define success. No one was ever considered a great leader because they filled out the vacation schedule neatly and on time. If you want to be a great leader, or even a good one, you must master the hard things that effective leaders must do.

Knowing what to do is not enough. You must act. And you must act before the moment for action is gone.

I began all my supervisory skills training programs by asking the men and women in my classes what they wanted to cover. Confronting a teammate about performance or behavior was always number one or two on their list.

We’re not so good at handling confrontation. Our culture works against it. I’ve seen leaders blow this in two ways.

Some try to soften the issue, so it won’t offend or trigger an aggressive response. Others practice what they think of as “brutal honesty.” But confrontation about performance or behavior can be firm and honest without being brutal.

Problems are like dinosaurs. When they’re small, they’re easy to handle. But if you let them be, they grow up and can eat you and your Land Rover.

Because confrontation is scary, you’ll be tempted to let things go and “work themselves out.” They rarely do. Most performance problems are not self-healing.

In most organizations, teams have a designated leader. If that’s you, part of your job is being the “default decider.” You’re expected to manage the process and make good decisions.

Gather opinions. Most of the writing about how to make a good decision says that you should start with information, but that doesn’t happen in the real world. In the real world, you start with opinions, and the opinions often determine what data you gather.

When it’s time to decide, pull the trigger. Being a leader isn’t about perfection. It’s about doing what you can with what you’ve got, including time and information.

Most effective leaders I’ve seen have learned how to stand back. They let people make decisions and they let people learn. That’s hard. You’ll be tempted to minimize mistakes at the expense of developing an effective team.

People crave control over their own work life. They’ll be happier and more productive if you let them make as many decisions as possible.

People like to learn, and if you want to have the most effective team possible you need to let them. Learning means they will make mistakes. Those mistakes are the price you pay for better performance in the future.

It’s Up to You

A friend of mine told me about a speech often given at Weight Watchers groups. The key idea is that you “pick your hard.” Sure, it’s hard to lose weight. But it’s also hard to carry that weight around and suffer some of the health problems that go with being overweight.

If you want to be an effective leader, you must do the hard things that define success. Since most of those hard things involve people, you’ll find that you get better at the hard things when you develop your soft skills.

You must confront teammates about poor behavior or performance.

You must deal with problems quickly.

You must make good decisions.

You must stand back so teammates can learn and grow.

You need soft skills to do the hard things.

Knowing what to do isn’t enough. You must act.