Are you a “me first” leader? 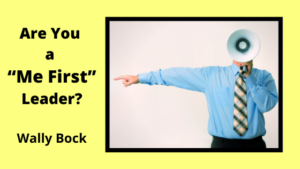 Organizations designate some people as responsible for the performance of a group. I call them “Capital L Leaders.” That’s you if leadership is your job. And, if that’s you, you have a big temptation to avoid.

“Me-first” leaders take advantage of that. That’s corruption and you must avoid it. It’s hard. It’s easy to become a “Me first” leader without even realizing it. If you’re the boss, people defer to you whether you want them to or not.

Human beings are just wired to be aware of hierarchy. It’s the way we are. Jordan Peterson puts it this way:

“The part of our brain that keeps track of our position in the dominance hierarchy is therefore exceptionally ancient and fundamental. It is a master control system, modulating our perceptions, values, emotions, thoughts, and actions.”

You might want to be just another member of the team. You might want to be “just like everyone else.” But if you’re a Leader, that’s not possible. Conversations change when you come into the room. Your team members may think a little more before they say something in front of you. If there’s a team party, the party changes when you show up and again when you leave.

The Meeting at The Rectangular Table

You can see hierarchy awareness in action at any meeting that has a rectangular table. No matter when the Leader arrives, he or she will find the seat at the head of the table vacant and waiting. Several people may have already come into the room. They found seats all around the table, but not at the head. That’s for the Leader.

Human nature is powerful. You’re not likely to overcome it, but you must deal with it. Here are some ways to determine if you’ve become a “me first” leader.

Do You Make Decisions Even When You Don’t Have To?

It’s easy to slip into the habit of making all the decisions for the team, especially in a meeting. If you catch yourself making the decision about where to go to lunch at every meeting, beware. If you make decisions about things that aren’t your job, you’ve probably become a “me first” leader.

Do You Take More of The Credit Than You Should?

How many times have you seen a headline giving a boss full credit for some accomplishment? It happens all the time. We hear that “Leader X changed the culture … ” or “Leader Y transformed … ”

Leader X and Leader Y sure had influence. But all that culture changing or transformation involved a lot more people than just him or her.

Former Oakland Police Chief George Hart was a great example of how to do this right. When there was a big arrest or major achievement, the officers and detectives got the credit. They were t talked to the press.  When there was a scandal or a big mistake, Chief Hart took the heat. The rule is simple. Give the credit. Take the heat.

If you become a “me first” leader, even if accidentally, you’ll wind up with a team of “Me first” members. They will seek preferment and advantage. They won’t cooperate unless they think it’s in their best interest. That’s a pretty good description of a dysfunctional team.

When You Think You Might Be Becoming A “Me First” Leader

Every leader slips into the role of “me first” leader from time to time. If you think that’s happening to you, stop and think about the basics.

If you’re responsible for the performance of a group, then your job is to help the team and team members succeed. If what you’re doing doesn’t help that happen, stop it.

If you’re a Leader, your job is to help the team and team members succeed. Anything that doesn’t serve that purpose has the whiff of corruption about it.