The Jazz Ministry, Creativity, and Innovation 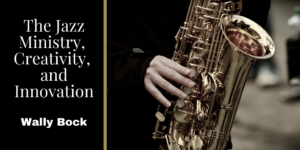 My father was a Lutheran Pastor in the Bronx in the 1940s when he came up with an idea to serve the men and women who worked in the city’s bars and nightclubs. The bars and clubs closed at 2 AM. He started a service at 3 AM, so they could go to church before they went home to sleep.

It was a good idea. People liked the services.  But they had to travel from where they worked to the Bronx at the end of a hard night’s work, then travel home after the service. And a service at 3 AM turned out to be hard on everyone. Eventually, Dad discontinued it.

Fast forward to the mid-1960s. Another Lutheran Pastor, John Garcia Gensel, took the basic idea and made some changes. They turned Dad’s idea into one of the best known and loved of New York’s ministries.

It’s easy to say that the idea was a little ahead of its time in the 1940s. But that’s not the whole story. Dad didn’t have the passion or time or resources to make his idea work.

Pastor Gensel was a passionate jazz fan. He gave the ministry a new name and focus: The Jazz Ministry. Then he changed the service time.

He created Jazz Vespers in the evening at St. Peter’s Lutheran Church of Manhattan. Now musicians and other workers in the bars and clubs could attend services on their way to work, after getting a good day’s sleep. The vespers service also drew people who didn’t work in the clubs but loved the music.

My father had a good  idea.  John Gensel took the same ideas and it became the Jazz Ministry. That’s the difference between creativity and innovation. The core idea was the same: serve a group who wasn’t being served.

John Gensel didn’t change the basic idea. He made it more specific. He built on his own passion and strengths. And he tweaked it to make it more effective.

Creativity and innovation are not the same thing.

The difference between an idea and an innovation, may be the time and resources to develop the idea.

The people who turn ideas into innovations are the ones with the skills and the passion.

No new idea comes out of the chute ready to go. An idea needs a champion, changes, and time to become an innovation.

1964 was just the start. Today the Jazz Ministry at St. Peters is a lot more than Jazz Vespers.

Pastor Gensel died in 1998. Here is his obituary from the NY Times