A Man Who Changed the World 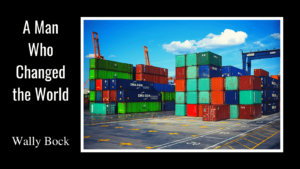 I don’t know what’s inscribed on Malcom McLean’s tombstone, but it might be: “He changed the world.” Mr. McLean invented container shipping and that is a very big deal indeed. But that’s not all.

Look around wherever you happen to be. Just about everything you see or set your hand on spent some time in a cargo container. In fact, according to one estimate, sixty percent of world trade, measured by value, travels in cargo containers.

World trade figures include a lot of things that can’t be shipped in a container, like gas, oil, grain, and just about anything you can pump. Take those out and you get an estimate closer to the one in the Economist—90%.

Malcom McLean was a farmer’s son. He was born near the town of Maxton, in Robeson County, North Carolina. He started working early, selling eggs for his mother, and taking a small commission. During the depression he got a job in a gas station. He saved his money. He bought a second-hand truck.

He called his company McLean Trucking. The first loads were dirt and other materials for local farmers.

He hauled the loads himself, like lots of young owners of their own trucking company still do. He did pretty well and managed to buy a few more trucks. Then some more. By 1940 he had thirty trucks.

In 1955 he sold McLean Trucking and its 1776 trucks for six million dollars. Not bad money for a farmer’s boy from Robeson County. But not world changing either. That would come next.

McLean took his money and bought the Pan Atlantic Tanker Company, which owned a fleet of mostly rusting oil tankers. He renamed the company Sea-Land and started the experiments he needed to do to implement an idea he’d had almost twenty years before.

It was 1937, and McLean was still driving one of his trucks. He’d hauled a load of cotton bales to Hoboken, New Jersey where he had to wait almost a whole day before his truck could be unloaded. He waited just like everyone else did, and he watched the process.

Every crate on every truck had to be unloaded by the stevedores working the docks. Then the crate was put in a sling and hoisted up and then down into the hold of the ship. There, more stevedores took it off the sling and made sure it was properly stowed. The method was, and is, called “break-bulk” shipping.

It was slow. It was labor intensive in the extreme. There were lots of accidents and pilferage.

I can imagine him sitting there in his truck or standing next to it amidst the noise and concentrated chaos of the docks. I bet he was thinking that wonderful phrase that is the source of almost all great commercial innovation: “This is stupid!!! There has to be a better way.”

The way he came up with was the cargo container. Goods are packed inside a standard size container. The container rides on the back of a truck or a train. When it’s going to be shipped over the ocean, the entire container is loaded at once. Simple idea. But like many simple ideas, not that easy to implement.

He learned what didn’t work and he learned what did. There were many experiments that proved an idea wouldn’t work. There were ideas that had to be modified to work well. At first, McLean loaded the whole truck trailer onto the ship. But it became obvious early that you really didn’t need the wheels on there. So, the wheels came off.

Finally, there came the day that the universe changed for shipping. It was 26 April 1956. McLean had taken an old tanker, the Ideal X, and strengthened her decks to handle the 58 containers that she carried. Ideal X left Port Newark and headed down the East Coast of the US, and around Florida to Houston.

That was the beginning. The first transatlantic shipment would wait until 1966, but the revolution was underway.

The container revolution transformed shipping because it was simply a better way to do things. Damage and pilferage went way down. Labor costs went way down. And turnaround time in port dropped, too, maximizing productive time for container ships. Since the introduction of containers, international trade has grown more than twice as fast as the global economy.

The Malcom McLean story has all the hallmarks of a Horatio Alger story or the Great American Entrepreneur Myth. You can imagine it as “Poor boy makes good, through purity of purpose, hard work, and a great idea.” Luck and pluck win the day. But that would be selling McLean short and missing a lot of the learning.

The success principles were surely there. McLean did work hard. He did seize opportunities. He had a great idea. But that’s not the whole story and it’s not enough.

McLean also did that hard work to make his idea a success. He put in time. He put in thought. He put in his money. Despite the mythology, good ideas don’t become great commercial successes all by themselves or all at once. A good idea is not enough, not without the energy and attention and hard work to refine it and shape it and change it.

Tenacity counts. Remember that Malcom McLean held on to that idea about a shipping container for more than two decades. He could have forgotten about it. In 1955 he could have taken his six million bucks and retired. Instead, he invested his time and money to make his idea work.

In 1969, Malcolm McLean cashed in his share of Sea-Land for $160 million, but he was only done with Sea-Land, not with life. He went on to develop a way to move a patient from a stretcher to a hospital bed with less discomfort. He set up a hog farm that was a model of cleanliness. A sort of coming full circle.

That was life for a man who changed the world. There were good ideas and the hard work to make them a reality.

Now it’s your turn. Look around you. Great ideas don’t come from books or classes in entrepreneurship. They come from life. What’s in your life that will be your next big idea?

The man who changed the world was a trucker, not a techie.

The idea that changed the world came from life.

It took lots of hard work to go from idea to application.

The big idea was important but so were millions of details.

Great story and lessons Wally. Thanks for sharing.

Thanks for that catch. You set me digging a little more. Actually, his parents named him “Malcolm.” But he changed his name to “Malcom” late in life. He changed it to match the Scottish spelling and to highlight his Scottish heritage.

A very inspiring story. Thank you for sharing.

I knew him well. Malcom was an original visionary. Warm , engaging, curious, relentlessly competitive and a fabulous sense of humor.
Thank you for the article. His achievements were truly epic He should not be forgotten.

I agree. High tech gets the glory these days, but the shipping container was a world changer.