3 Ways to Make Sure Nobody Shares Their Good Ideas 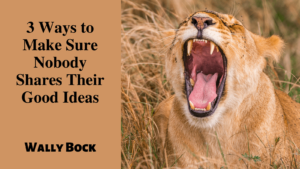 Vic dropped out of high school, which is how he found himself in his late thirties in a succession of menial jobs. He went back to school to get his high school diploma.

I don’t mean “adult school” and a GED. Vic went to high school during the day, while he worked nights, and sat in class with his children and their friends. He wanted to do it right.

That same passion to do things right and inner drive made him successful at a lot of things. He was an expert cabinet maker, a marathon runner, and the best shade tree mechanic and household handyman most of us ever knew. He was creative and almost compulsive about getting the details of a project right.

Vic had a lot to offer. Unfortunately, the people he worked for didn’t seem to appreciate it. They could have used his strengths and ideas. Vic would have been a happy worker. The company would have benefited from his ideas and excellent work.

That’s not what happened. They quickly taught Vic that they didn’t care about him or his ideas. If you don’t want the bother of fielding good ideas, here are three ways you can make sure no one brings you good ideas.

Make Sure Everyone Fits the Model

With his new high school diploma, Vic’s experience and excellent references got him a full-time job at the big plant in town. He always said it was funny that the company only thought he was qualified after he got the diploma. He knew high school didn’t teach him anything about the job he hadn’t already demonstrated in more than a decade of work. But the people at the company said he had to have a high school education.

That was his first lesson. You must fit the model.

Vic’s second lesson came during his first month on the job. Vic suggested an idea about how all the mechanics could be more efficient. His boss wasn’t impressed. “They pay me to listen to people who wear ties,” he said, “and they pay you to listen to me, not the other way around.” The lesson was clear: only people wearing ties could make suggestions.

A new, young manager taught Vic his third lesson. The young man had an MBA. The company considered him high potential. So, he was rotating through jobs in different parts of the company to learn about them. His current job was dispatching mechanics like Vic.

A unit at the other end of the plant called to report a problem. The young manager assigned the job to Vic.  Vic went to the parts crib to check out some parts.

“What are you doing?” the manager asked.

“Getting some parts for the job on the other side.”

“You don’t even know what the problem is. Go diagnose it and then come back.”

“I’ve got a good idea what it is. We get that call about once a month. If I’m not right this time, I’ll check these parts back in.”

“That’s inefficient. You’re going to do this right. Go gather information about the problem. Then come back and analyze it. I’ll help you if you want. You can get any tools and parts you need and go fix it.”

Vic nodded. He thought about mentioning the inefficiency of making two trips when you could make one. But he’d learned his third lesson. From that day on, he didn’t quit thinking, but he quit sharing his thoughts with the company.

25 Years at the Plant

But he stopped taking his creativity to work.  I wonder what opportunities his company missed because of it. That supervisor who wasn’t paid to listen to Vic, missed a flow of ideas that could have made the team more effective and made him look good. The young manager missed an opportunity to learn from a seasoned hand like Vic.

Vic hated going to work every day, but he went and did his work well. I asked him why he did it. He said, “I won’t let the bastards beat me.”

The Day It All Changed

That changed the day he retired. Vic threw a big party. There was plenty to eat and drink. There were balloons with “Free at last!!” written on them. It was like someone threw a switch and he went from “Frowning Vic” to “Smiling Vic.”

Vic started a small cabinetmaking business. He was happy. Over at the plant, they filed his records away. They never suspected what they missed.

If you stifle creativity at work, you never have to worry about implementing a good idea.

You may be missing some great workers because you screen for things that have nothing to do with the work.

Supervisors should treat teammates ideas as a gift, not an impertinence.

Frontline workers know a lot. Listen to them.

Frontline workers know a lot. Learn from them.

People want to bring their creativity to work. You’ll both better off if they can.