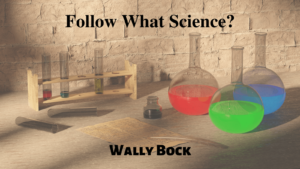 Thanks to the pandemic, we’ve become familiar with the phrase, “follow the science.” That would be great if there was agreement on just what should be followed. Politicians claim to “follow the science” and accuse the other side of failing to do so.

If all you followed was the public debate, you might think that science is a giant answer machine. Just bring your question. “Science” will spit out an answer like Carnac the Magnificent so you know exactly what to do and will live happily ever after.

I’ve got news, people. Science is not a giant monolithic thing that dispenses answers. It’s not magic, either.

Science is a process

Science doesn’t come equipped with surefire answers. Instead, science is the process of trying to figure things out.

The next step is to create a hypothesis, an idea about how things work. Then conduct an experiment or study to test the hypothesis. Your results are subject to review. They’ll inspire others who will try to replicate your findings. Other people will present conflicting hypotheses and results. Science is the process of sorting that all out.

A study or two that agrees with you is not science

Of course, you can pick a study that agrees with you and pretend it proves your point. Politicians do that all the time. So do business writers.

But if you are going to be true to the process, you can’t just state your opinion and then cherry-pick your proof. This can be a problem for business readers because there are so many articles and books out there that claimed to “follow the science.” Many of them disagree with each other. Alas, that means that you must do the work of sorting out what’s likely to be right from everything else.

Making sense of it all

Here’s how to make sense of it all. Start by being skeptical, especially if an article uses the phrases “according to science” or “based on science.”

Look for research that came to different conclusions. Ask questions about the research. Here are a few to get you started.

How many people were studied?

Were all the subjects college students?

How were they selected?

How was the experiment or study conducted?

Play with the findings, either in your head or in real life. Turn percentages into raw numbers. Turn raw numbers into percentages.

The fact is that most of us don’t have the background or education to understand much of the research we stumble across. Then, it’s time to follow Walter Lippmann’s advice.

Look for honest men and women who are experts. Pay attention to what they say. Compare their opinions with each other.

Here’s some good news. There’s no reason why scientists should have all the fun. You can do your own tests and experiments

Start with ideas from the research you read. Then test the recommendations to see if they apply to you. If you read an article, for example, where “science” says you should stand on your head for 42 minutes before breakfast, try it.

Science is not Carnac the Magnificent.

Science is a process.

A study or two that agrees with you is not science.

Ask basic questions and play with the numbers and ideas.

Do your own experiments.