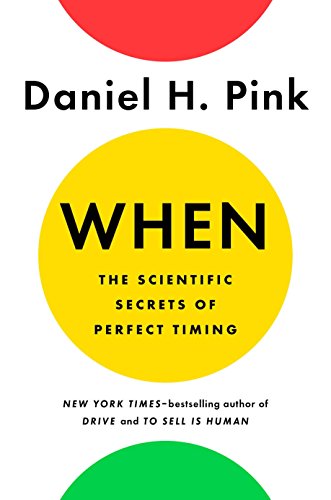 I think the best way for you to know what Dan Pink wants you to get out of When: The Scientific Secrets of Perfect Timing is to quote a long paragraph from the end of the book.

Dan Pink begins the book like the good speech writer he was, with an interesting story and a question. The story is about Captain William Turner, who was in command of the Lusitania when German U-boats sank her and escalated World War I. We know that in the hours immediately prior to being torpedoed, Turner made several bad decisions. Pink says, “Maybe those decisions were bad because he made them in the afternoon.”

That’s his transition to the opening of the book and the idea that we can understand many things about us by understanding what scientific research is finding out about timing. Pink calls it “an emerging body of multi-faceted, multi-disciplinary research.”

Pink has divided his book on “perfect timing” into three sections. Part 1 is about the day. There are two chapters. Part 2 is about “Beginnings, endings, and in between.” There are five chapters in that section. Part 3 is two chapters on “Syncing and Thinking.” Here’s a little more detail about the contents.

Chapter one is devoted to the hidden pattern of everyday life and introduces us to chronotypes. While chronotypes result in a personal pattern of daily rhythms, they all include three stages: a peak, a trough, and a rebound.

The next chapter is about breaks and naps. It also addresses the question that Pink raised in the introduction about whether Captain Turner’s bad decisions were caused by being in the afternoon.

Part 2 is about the emotional power of beginnings and endings. There are also some crucial insights on midpoints. That’s where Pink introduces us to what he calls “The uh-oh effect.” That’s that period where you or your team are working on a project and suddenly realize that if you don’t get your act together, you won’t make your deadline. Uh-oh.

The final section of the book is devoted to syncing and thinking. There’s one chapter on syncing, the way that we work in groups. Pink says that group timing requires “someone or something above and apart from the group itself to set the pace, maintain the standards, and focus the collective mind.” He calls that “someone or something” a “boss.”

The final content chapter of the book is “Thinking in Tenses.” It’s about how we deal with the past, present, and future.

In addition to the core content of this book, Pink gives us a “Time Hacker’s Handbook.” I suspect that he does this for two reasons. It makes the book longer, pushing it up beyond the magical 250 pages that most mainline publishers want a business book to have. And, by putting the practical applications stuff in the Time Hacker’s Handbook, Pink avoids the tough writing challenge of integrating it into the basic text of the book.

When: The Scientific Secrets of Perfect Timing is pretty much Dan Pink. The writing clips along, and you’ll learn lots of interesting stuff. Pink is great at pulling together a bunch of surveys and studies and stuff and making a point. But that’s also the problem, he’s always making a point. That means that he glosses over things that don’t help him make his point. He also doesn’t spend much time talking about the complexities. In this book, one of those complexities might be how the different factors, such as diets and schedules and chronotypes interact in real life. And, as with every Dan Pink book, I always wonder what he’s left out.

If you want a quick introduction to the research around timing and our biological clocks, buy and read this book. If you want a more comprehensive or even-handed treatment of the subject, skip this book and do some of the research work yourself.