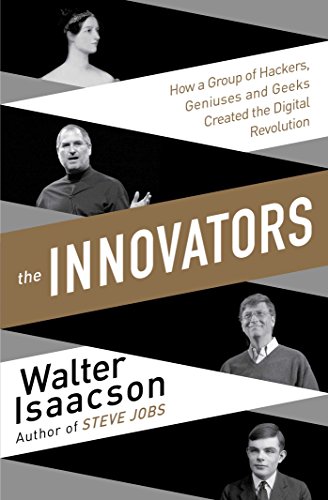 I still remember my mother’s instructions on the day that I made my first phone call. “Wally,” she said, “pick up the phone and listen for the operator to say ‘Number, please?’”

That was 1952. It was also the year when Grace Hopper developed the first computer compiler and a computer predicted the winner of a presidential election. We’ve sure come a long way since then.

My telephone story didn’t make Walter Isaacson’s book, The Innovators: How A Group of Hackers, Geniuses, And Geeks Created the Digital Revolution, but Grace Hopper’s story did, and so did the story of that UNIVAC computer that predicted the outcome of the presidential election. If you like stories of human ingenuity, and you’re interested in how we got to where we are today in technology, this is the book for you.

Walter Isaacson is an amazing writer and a great storyteller. The book is a selection of stories, beginning back in 1843 with Ada Lovelace, right down to almost the present day with the stories of Wikipedia and IBM’s Watson computer beating the experts on Jeopardy!

There are stories about people that I’m sure you’ve heard of, like Steve Jobs and Bill Gates and Steward Brand. There are also stories of people who aren’t as well-known to the general public.

You’ll read about Paul Baran, who devised the packet-switching technology that makes the internet possible. There’s the story of Ray Tomlinson, who gets credit for creating the first email program. You’ll learn about the powerful influence that World War II had on the development of technology. You’ll trace the genealogy of important tech companies, from Bell Labs through Shockley Semiconductor, Fairchild Semiconductor, and Intel. You’ll learn how George Boole’s system of using algebra for logical reasoning (1847) was used by Claude Shannon almost a century later.

I’ve got a special perspective on this book stories because I’ve been fascinated with technology since I was young, and because I was “present at the creation” when computers were moving from kits to finished goods and computing was changing from mainframe systems to client-server systems. I have first-hand experience with some of the people and situations described in this book, and by and large, Isaacson got them all right.

If you’re interested in the history of technology and how we got to where we are today, rendered in well-told, accurate stories, you’ll want to read The Innovators: How A Group of Hackers, Geniuses, And Geeks Created the Digital Revolution by Walter Isaacson.

Writing about technology and the rise of the net is a bit of a cottage industry. The three books listed just below are the best of the batch, in my humble view.

The Idea Factory: Bell Labs and the Great Age of American Innovation by Jon Gertner.

Dealers of Lightning: Xerox PARC and the Dawn of the Computer Age by Michael A. Hiltzik

The Information: A History, A Theory, A Flood by James Gleick

The next two books are excellent books of a different kind. The New New Thing: A Silicon Valley Story by Michael Lewis, is all about Jim Clark, one of the most colorful and least well-known characters of the early internet. Clark founded Silicon Graphics and was a co-founder of Netscape. You owe more to him than you realize.

Ah, but who is that fellow sleeping under his desk in the often-reproduced photo by Meri Simon titled “Sleepless in Silicon Valley?” When you read Po Bronson’s delightful book, The Nudist on the Late Shift, you’ll discover that the sleeping programmer is none other than Dave Filo, co-founder of Yahoo. You’ll learn a lot more, too.