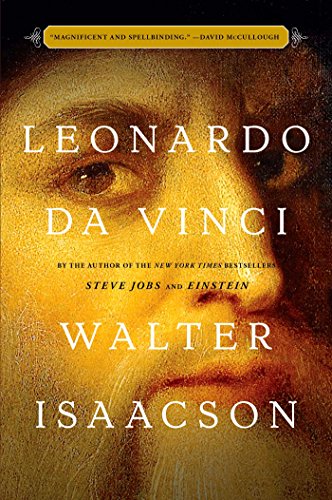 Before I started reading, I thought I knew the basics. Leonardo was the painter of perhaps the two most famous paintings in history: The Last Supper and the Mona Lisa. I had that right. But most of the rest of what I thought I knew turned out to be either wrong or incomplete.

The man certainly was a creative genius, but a lot of the things that I’d read about him, like that bit about the “first helicopter,” turned out to be wrong. I didn’t know how much he did beyond painting and how deep he went on so many topics.

Leonardo was certainly the prototype of the Renaissance Man, and looking back, we can see that he was born at the right time for someone with broad interests and many talents. Leonardo was born in 1452 and died in 1519. That gave him a long, productive life of 67 years. He was a bastard, which wasn’t a problem in Florence when he was born and may even have given him some advantages. He didn’t get a lot of formal schooling, which meant that he started to learn on his own and developed methods that worked for him.

He started out in Florence, where he was apprenticed to an excellent master, and learned the craft of painting. But early in his life, he moved to Milan. That turned out to be a good thing, too. Florence was more artistic, but Milan had a much more diverse culture of people interested in the sciences. And it was in the sciences and engineering that Leonardo would do a lot of work I knew nothing about and now shake my head at, in wonder.

Leonardo’s work in science included the development of thinking on perspective. I always thought perspective was a kind of geometric thing about painting. But it turns out that he developed three views of perspective. One was the standard vanishing point thing, but the others were the way color changes as distance increases, and the way that we lose detail on things the further they are away.

He made contributions to anatomy by doing dissections of cadavers of both humans and animals. He certainly learned from his dissections, and he also captured what he observed in drawings and notes.

He may have made even more contributions to engineering. He did a lot of military engineering, and a lot that revolves around water flows, including water systems for cities and diverting rivers. By the time I got to the end of the book, it seemed like Leonardo had done some work in almost any area of human knowledge. Not all of that work was great, or groundbreaking, but an awful lot of it was. So, the question is, how did he do it? That’s where I got my biggest takeaways from the book.

Leonardo was very smart. Okay, we got that out of the way. Most of the people we call geniuses are very smart. But there are an awful lot of very smart people who aren’t geniuses. What really separates geniuses from the rest of the pack is what they do, not raw brainpower.

The good news is that we have a pretty good idea of what Leonardo did. Isaacson developed his book primarily from the 7,000+ pages we have from Leonardo’s notebooks. That’s a lot, but it’s probably only about a quarter of the total he created. Here’s what Leonardo did to produce the quantity of quality insight and production that characterized his life.

Leonardo captured his ideas. Early in his life, he developed a habit of walking around with a notebook that he used to jot down observations and make quick sketches. He even developed a shorthand that would help him recreate things he’d seen when he got back to his studio and wanted to draw them in detail.

Leonardo was an acute observer who trained himself to be better. It helped that he was also a facile drawer. But the main driver of his close observations was curiosity.

He developed his own process for observing things. It began with what Isaacson calls “marching orders.” Leonardo described what he needed to do to learn or properly observe something. Then he would go and observe.

Leonardo learned by experimenting. Besides observing, Leonardo was an avid experimenter and he recorded both the experiments and what he learned from them.

Leonardo got ideas and sharpened ideas through his reading. The printing press was invented the year Leonardo was born. By the time he was 40, books were increasingly common, and an autodidact like Leonardo could learn and get ideas from books.

Leonardo had many friendships and collaborators over the years. This was not the lone genius retiring to his studio and producing bursts of insight. This is a man who went out into the world to observe, made careful observations, and then hone his understanding with reading, discussion, and experiment.

Isaacson includes a final chapter in the book about things you can learn from Leonardo, and it’s a chapter worth reading. But there’s a statement of Isaacson’s near the beginning of the book that sums up the takeaway for me.

“His genius was of the type we can understand, even take lessons from. It was based on skills we can aspire to improve in ourselves, such as curiosity and intense observation.”

And, I would add, experiment and collaboration.

Before you read the book straight through, read that final chapter about what you can learn from Leonardo. It will give you a frame for learning as you go.

Leonardo da Vinci by Walter Isaacson is a thorough and well-written biography of one of history’s most fascinating individuals. You’ll enjoy the read. You’ll learn a lot. With a little effort, you can improve the way you see the world and develop some discipline so that you can be more like Leonardo than you are today.