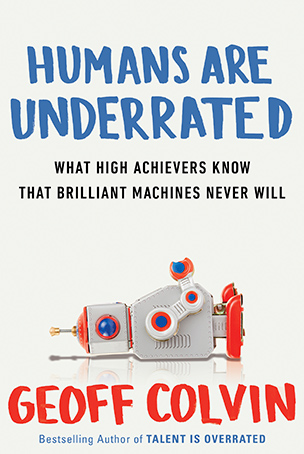 Geoff Colvin is onto something and it makes Humans Are Underrated: What High Achievers Know That Brilliant Machines Never Will an important book that you should read.

There are a host of books out there that look at advances in robotics, artificial intelligence, machine learning and the like. Most of them made predictions about what the future will be like for humans. On one side are the folks who say “It won’t be bad, machines will never be able to do some of the things that humans do.” They usually light on things like intelligence and creativity and judgement and suggest that not much will change. On the other side are the folks who say “Beware! The robots are coming!” Those folks usually point to how fast things are changing and make predictions about how humans are doomed and probably sooner than we think.

What Geoff Colvin has done is astonishingly simple and astonishingly helpful. Instead of diving deeply into technology and futuristics and trying to make predictions, he points out that the thing that makes us human is not our creativity or anything like that, instead, it’s the fact that we are social beings. Here’s the core of the book, in Colvin’s own words.

“The new high-value skills are instead part of our deepest nature, the abilities that literally define us as humans: sensing the thoughts and feelings of others, working productively in groups, building relationships, solving problems together, expressing ourselves with greater power than logic can ever achieve.”

Here’s a quick overview of the table of contents.

Chapter one is about how rapidly technology is improving. It’s a good pair for chapter two, which is about gauging the challenge of advancing technology.

Chapter three is the hinge of the book. The key point is “Social interaction is what our brains are for.” Colvin ties his analysis to the work of anthropologist Donald Brown, about the features of culture that are universal and define what humanity is. Toward the end of the chapter, Colvin comes to this conclusion.

Just when you thought it was going to be easy, chapter four describes why the skills we need to be intensely human are withering. This is not the common refrain that “the internet is making us stupid.” It’s much more important and much more relevant. Colvin uses research and examples to illustrate his conclusion that the increasingly virtual nature of our lives makes us less human. This is based in part on the research that shows online social networks affect us and our behavior very differently than in-person social networks.

Chapter seven is an excellent overview of what makes teams work. If you’ve read the Google research into effective teams, you’ll be very comfortable reading this chapter.

Chapter eight is the extraordinary power of story. This is the first of three chapters that investigate specific issues. Chapter nine looks at the human essence of innovation and creativity. This is about the particularly human way of solving problems, particularly in group settings. Chapter ten looks at what we know about the differences between men and women and asks, “Is it a woman’s world?”

In chapter eleven, Colvin sums up the book. He suggests that there are certain things which it makes sense to do online or virtually, like learning mental skills, but that you learn to be a human being only when you hang out with other human beings. If you want to do the best in the future, you need to be able to do both. You need to spend time alone doing things that are best done that way and spend time with people to keep and enhance your humanity.

I give special praise to Colvin for the way he handled the notes section. I love the notes in a good business book because they point me to sources for further learning. Geoff Colvin has made that easier and more effective by the way he adds comments to specific source notes.

This is an insightful and helpful book that will help you live the rest of your life more productively. Instead of specific predictions, either about what will happen and how you should react, Colvin has given us a framework within which we can adapt to whatever happens next. That’s not giving you a fish, it’s teaching you how to fish and it’s the reason to read Humans Are Underrated: What High Achievers Know That Brilliant Machines Never Will