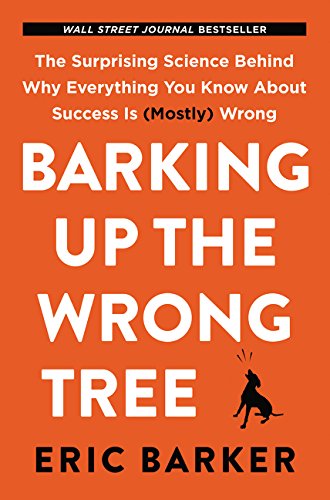 At first glance, you may think that Barking Up the Wrong Tree: The Surprising Science Behind Why Everything You Know About Success Is (Mostly) Wrong by Eric Barker is another book by some motivational speaker designed to convey the secrets of life and success. Don’t make that mistake. Yes, I know, just about everybody who’s going to tell you how to improve yourself today claims that they’ve based their recommendations on science or, in a burst of faddism, “neuroscience.” Most of them haven’t done enough homework.

This book is different. If you’re serious about living a life that’s more like the one you want to live, you should read this book. Before I tell you why, let me tell you something about me so you can judge my recommendations.

I’m 71 years old, and for more than half a century, I’ve been working on making myself and my life better. I’ve learned a lot by getting it wrong and then adjusting, and I’ve learned a lot by reading and talking to other people and trying things. As a result, I’ve read a lot of books about how to do life better and this is one of the best. Early in the book, Eric Barker says this:

“You’ve been told about all the qualities and tactics that will help you get where you want to go, but there’s no real proof – and perhaps you’ve seen plenty of exceptions. That’s what we’re going to look at in this book.”

Barker keeps his promise in six focused chapters. Chapter 1 is about whether playing it safe produces success. Chapter 2 deals with whether nice guys finish last or first. In Chapter 3, he looks at the emerging science of resilience, starting with Navy SEAL training. I bet you’ve never thought of SEAL training as a game, but you might after you read this. Chapter 4 addresses the issue of whether success is based on what you know or who you know. Chapter 5 is all about attitude. Chapter 6 is a step back to review the big picture.

Barker makes another promise early in the book. He promises that in each chapter he’ll review both sides of the issue. He keeps that promise and it’s one of the reasons why this is a great and helpful book.

This book was valuable to me for several reasons. Here they are.

Barker does what many great business and self-help authors do. He states things that you could not have articulated before but seem obvious once he says them. One thing like that for me was the fact that the major reason people don’t get enough sleep is that they spend the time working. He also adds detail and insight to things I already knew.

I knew that turning challenges into games was a good thing and it’s a technique I’ve used for years, but I didn’t know much of the science behind it until I read this book. In fact, this book has the best short summary I’ve come across of how to use game elements to make your life and work experience better.

Barker reframed things that I already knew. I knew, for example, that the beginnings and endings of things are perceived as important. I used that to design speeches and training programs. After reading this book, I’m thinking about the same thing when I plan my day. There’s a bit of science about why your mood in the morning can affect your whole day. And more about ending the day right.

There are also things here that I’d already discovered for myself over the last several decades. Among them are the facts that naps can greatly improve performance and that relationships are the key to a satisfying life. There’s also the idea that saying “no” is a critical skill if you want to be as successful as possible. There’s material on why making progress every day and seeking out small wins is both a good strategy and emotionally satisfying.

There were also some things that were brand-new to me. I learned about self-compassion and it’s something that I will try to use in my life. Barker told me about the research that supports the idea that we don’t do the things that make us the happiest naturally. Instead, we do what’s easy. And he introduced me to the idea of intensifiers, traits that are mostly negative but can be huge performance enhancers in certain situations.

In addition to covering both sides of several important issues, Barker does a magnificent job of connecting the dots. As you move through the book you will find that things discussed in early chapters will make another visit in later chapters.

Toward the end of the book he puts together a framework for creating a successful life. I’ve used several of these frameworks in my life to evaluate how things were going and to get ideas for what improvements I should prioritize. Generally, they had more than four issues. His four are happiness (enjoying), achievement (winning), significance (counting to others), and legacy. A single word for legacy is extending, but I find his definition much more helpful: “Establishing your values or accomplishments in ways that help others find future success.”

Barking Up the Wrong Tree is a book which will help you do better at work and in life.

Read The Progress Principle by Teresa Amabile and Steven Kramer, for more on the importance of making even small bits of progress.

If you’re responsible for the performance of a group, check out my ebook, Become a Better Boss One Tip at a Time.

Thanks for your review. You had a much more positive outlook on this book than I did. I can say Eric did a great job with his stories and illustration of points, but I felt like most of the concepts he talked about are already well known. It almost seemed like he addressed both sides of every situation so well that I didn’t feel the need to change my own behavior because he justified staying exactly where I am in life.

Anyways I liked your positive take from the book and it made me appreciate the book a little more.