Leadership by What Example? 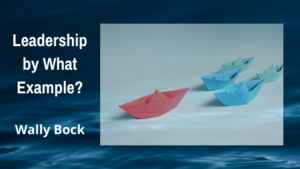 “There is no leadership without leadership by example.” ~ Captain James Westley Ayers, USMC

Captain Ayers was right. There is no leadership without leadership by example. What he didn’t say is that example can be good or bad. You don’t get any choice about whether you lead by example, only about the kind of example you set.

Most writing about leadership by example assumes a good example. If you work hard, the people on your team will work hard, too. If you’re honest, they will be, too. It’s the way it is. It’s human nature.

Human nature has a baked-in capacity and desire for hierarchy. That’s why you must be careful. It’s easy to set a bad example.

If you’re the person responsible for the performance of a group, the other members watch you. That’s because you have some power over them. It may not be much, but it’s there. They watch what you do as a guide to what they should do.

Everyone I know who’s been promoted in large organizations has some version of the same story. A leader does something without much thinking about it and people take it as a guide to behavior. The story I like best is the one told by Linda Hill about when she was promoted to President of General Dynamics.

She went shopping for a new suit to celebrate her promotion. The salesperson sold her a scarf with the suit and showed her an interesting way to tie the scarf. She wore the suit and the scarf, tied in that special way, her first day on the job. What happened, in Ms. Hill’s own words.

“And then I came back to work the next day and I ran into no fewer than a dozen women in the organization who have on scarves tied exactly like mine.”

Another friend tells about his first day on the job as plant manager. He made several casual comments about how they could move equipment to be more effective. The next day, when he went to the plant, he found that all his “ideas” had been implemented overnight.

Then, there was the friend who forgot to get his usual morning coffee on the way to the office on his first day in a new position. When he realized what he’d done, he said out loud to himself, in his office, “God, I wish I had some coffee.” Within minutes, three cups of coffee arrived.

Be careful what you do and what you say. People are watching.

Be Careful What You Praise

Praise is a power tool. You use it so that people will do things or keep doing things that you want them to do. We love praise. Just remember, people are listening.

How Do You Act When Things Don’t Go Your Way?

Some things will not work the way you’d hoped. Some news will be bad news. How you act tells your team members some important things.

If you receive bad news gracefully and take it as information, people will be more likely to bring it. Even more, if you thank them for letting you know. People don’t mind being the messenger that gets praised for doing a good deed. They don’t want to be the messenger who gets killed.

When you’re interrupted it’s another opportunity to set a good example. Treat the people who interrupt you with respect and courtesy. Then, if the interruption is inappropriate, tell them why.

What You Tolerate, You Condone

It’s hard to do, but you need to address behavior or performance that violates your standards or values.

Mark Deterding tells a story from early in his career. Mark was in his mid-twenties, when he was transferred and promoted to plant manager. During his first few meetings, he was struck by the amount of swearing by the seasoned veterans on his team.

He decided he would just model the right way and his team members would change. But it didn’t work that way. They went right on swearing. Here’s the lesson Mark said he learned.

“It’s not enough to just model the way. It’s just as important to clearly and immediately address any issues that violate the values of the organization. When you allow unacceptable behaviors to go unaddressed, you send the message that the behavior is okay.”

When you lead by example, you use your behavior to influence the behavior and performance of team members. Your influence is a leadership superpower. And, like any superpower, you can use it for good or for evil. What’s your choice?