Boss’s Tip of the Week: When you’re criticized 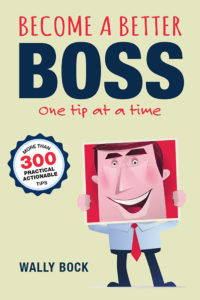 You won’t make it through life or work without receiving criticism that hurts. Often, it will follow the words, “Can I give you a little feedback?”

This is only one of 347 tips in my ebook, Become a Better Boss One Tip at a Time.

Just promoted from individual contributor? Check out my book, Now You’re the Boss: Making the Most of the Most Important Transition in Business.