4 Things you should know about great work teams 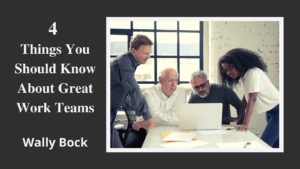 Teams are how we work now

Teams are everywhere. If you’re in business, they’re a fact of life and they’re more and more important. Here’s what Rob Cross, Reb Rebele, and Adam Grant say:

“According to data we have collected over the past two decades, the time spent by managers and employees in collaborative activities has ballooned by 50% or more.”

They make the case that we may have gone too far and that we may be seeing “Collaborative Overload” because of all the teamwork. Maybe. But I think it makes sense to separate all the project teams we’re part of and all the groups that aren’t really teams from the core work team that’s the center of many work lives

Those are the teams that are part of work every day. What happens there determines quality of work life for most people.

I’ve studied those teams intensely for the last couple of years, often as part of client project. Here’s what I think you should know if you’re putting together a work team.

Distance is the Devil

The promise was that technology would let us have productive teams even when the team members were scattered across distance and time. Don’t believe it. Distance, even a little distance, is the Devil.

The magic that great teams deliver is based, in part, on the ability share ideas and experience easily. Software developer David Starr puts it superbly.

“When team members don’t sit together they tend to replace easy verbal exchanges with harder and more formal conversations. Rather than quick, efficient discussions about small, tactical decisions, subjects queue up and wait to be discussed later. Often, later never comes. Less person-to-person communication means pushing the communication down into other things, like specifications, work tickets, or even code. “

The very best teams work together, in the same place. There may be virtual support staff and some virtual teams may outperform some co-located teams, but great teams really do work together.

The magic is in the mix

You want the right skills on your team so you can accomplish your objective. But you also want good team players.

There is such a thing. They have what Andy Grove called “the right kind of ambition.” That means putting the success of the team above individual success.

Good team players also have high emotional intelligence. They’re sensitive to the emotions of others and willing to modify their own behavior based on what they sense. Good team players make up “smarter teams.” But the mix alone is not enough to make a team great.

Even the best team players can be ineffective in a toxic culture. Great teams have a great team culture.

When you get this right people share ideas and opinions. They will feel safe enough to admit mistakes or take the risk of looking foolish. Google’s Aristotle Project identified “Five Keys to a Successful Google Team” that will work for any team.

very well said. better to be a well oil-ed machine together, than have a bunch of loose parts ;)

There is such a thing. They have what Andy Grove called “the right kind of ambition.” That means putting the success of the team above individual success.