The Fix is Never In 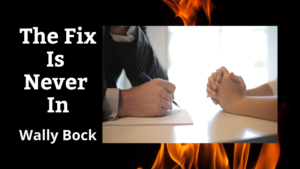 I remember the first time someone cried in my office. I didn’t handle it well. My job that day was to fire Dorothy. It had been a long time coming.

I inherited Dorothy, and she’d had “issues” for a long time. Her work was never up to standard. There were behavioral issues, too, and they affected the whole team. Over the last few months, we had several conversations about what needed to change and how. Nothing changed.

That brought us to that day, in my office. I tried to make small talk first, the way the books I read suggested. Dorothy just sat there, leaning forward with her hands on her knees, her face set in stone.

I tried to make her feel good, see the opportunities in her new situation, assume a positive attitude. I could see it wasn’t working. I told her we had to let her go.

For a couple of seconds, nothing changed. Then, her lower lip quivered, and seconds later, there was a flood of tears. She stood up and turned to the door, gave me a hard look, and said, “You don’t have to fire me. You choose to fire me.”

Advice from My Father, The Pastor

That night, I called my father. Normally, on anything involving emotions, I called my mother. That was her strength and her advice was always good. But I figured my dad was a pastor and he dealt with people in crisis situations all the time. He talked with people who wanted to commit suicide and people who were facing an unwanted divorce and people who’d lost a child. I thought he’d have good advice for me.

I described the situation to Dad. He asked if I was calling him for some magic words that would have made Dorothy feel good. I admitted that I was.

“Why should she feel good?” my father asked. “She just got fired.”

I got a lot of good advice that night. My dad told me that I could expect to be uncomfortable in situations like that even if I wasn’t the one getting fired. He told me he was glad that firing someone bothered me. He was also glad that I was sure I had done everything I could.

As we wrapped up the call, Dad said something that I return to time and again in tough emotional situations. “You shouldn’t make it harder, but you won’t make it easy or comfortable. You can’t fix emotions or people.”

What You Can Do

You don’t have a magic wand as a boss that you can save to make things right. Instead of a magic wand, you have your behavior. Behavior is what you say and what you do.

Use your behavior to arrange the setting and situation so your team member has privacy. Do things in a way that show your respect for him or her.

That’s all that you can control. Ultimately, how someone else feels and what they do is up to them. You have influence, not control.

You Can’t Fix Performance Issues, Either

You can’t open a control panel on a person and adjust the settings so behavior and performance change. You don’t have that power. Instead, you use your behavior and influence to increase the odds that things will come out right.

Provide clear instructions about what you want people to do. Work with them to set clear and reasonable performance targets. Be specific about what behavior you hope will change. Agree on how you’ll both be able to tell if it has.

Keep in mind that you’re concerned with two things. One is the specifics of what you want. The other is the way that the performance or behavior fits into the larger scheme of things. Let people know how what they say and do affects team performance and team morale.

Check for understanding. It’s easy for two people to understand the same words in different ways. Ask a team member to feed back to you what they think you want.

Follow up to check that good things are happening. Praise good performance and progress. Help the team member succeed. If that turns out not to be possible, adjust your expectations.

You can’t fix people or emotions.

You won’t make difficult situations easy or comfortable. Just don’t make them harder than they need to be.

Use your behavior to influence the behavior and performance of others.

Don’t expect people to control their emotions. They can’t and you can’t.

Do everything you can to help things come out right, but how people feel and how they act is up to them.

Great advice on this! After experiencing someone else’s crisis, it is natural to empathize with them and take home some of their pain. I think it is only natural to want to fix everything, but you are absolutely right, we cannot fix emotions, we can only do our best to not make them worse, and we cannot fix people, we can only do our best to influence them. Thanks for the read, I may have to re-read it next time I have that difficult conversation.