Return to the Office is Not the Same for Everyone 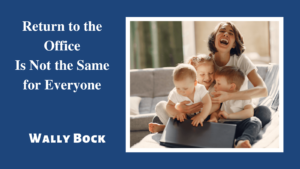 In 1989, the Loma Prieta earthquake devastated Northern California. It put a huge crack in Candlestick Park, dropped a section of the Bay Bridge into the water, and rendered the building where I had my office too dangerous to enter.

I shifted to using my home office full time for about a year. I began thinking about having a downtown office again. My daughter Debbie weighed in. “Dad, please get another office downtown. We saw more of you when you had one.”

That moment came back to me when I thought about all the people who may (or may not) be asked to go back to a downtown office after working at home for a year. Many articles make it seem like a simple debate. Some pundits say companies want people back in the office because being together will foster innovation. Other pundits say the pandemic taught us that working from home should be the way we work from now on. As usual, reality is more complex. It starts with language.

It’s Not “Returning to Work”

People who talk about “retuning to work” have it all wrong. The people who’ve been at home all these months haven’t been on vacation. They’ve been working.

The challenge is figuring out how the people and businesses they work for will fare best. It’s not simple or easy because there is a wide range of situations.

The Work from Home Experience

For some people working from home was great. They had more control over when and how they worked. Some had a nice, well-equipped workspace.

For others, working entirely from home was awful or worse. Suddenly they had to work and care for their children all at the same time. Most didn’t have a nice, dedicated workspace. Some who had a home office, had to share it with a spouse.

The Office They’re Returning To

The office they’re returning to is part of the equation. Some people crave the experience of being together with colleagues. They enjoy the camaraderie and they’ve missed it.

Others haven’t missed that intrusive boss, or the co-worker with bad hygiene, or that handsy fellow who was always dropping by.  Some do not ever want to work in the dreaded open plan office again.

And then there’s the money. One woman described it to me like a cut in pay. Once you go back to the office you have more childcare expenses, you spend more on clothing and lunches. Transportation and parking cost money. And there’s that commute that suddenly seems very long indeed.

Too Many Combinations to Count

Think about all the variations. There are far too many to count or plan for. The move to working from home was sudden and forced by the pandemic. The move back to the office or something “hybrid” promises to be a clusterfugg. The great move to return to the office will make Murphy of Murphy’s Law fame look like wild-eyed optimist.

There are many different WFH experiences.

There are things to dread about the office.

There are thousands of combinations of situations.

The great move to return to the office will make Murphy of Murphy’s Law fame look like wild-eyed optimist.

Thanks to Steve Keating, whose post, “The Balance Between Office and Remote Work,” started the train of thought that lead to this post.