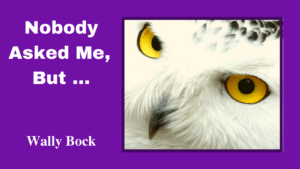 Nobody asked me but …

Big teams have an awfully hard time getting things done. Seems like the craziness starts around 6 or 8 team members.

The hard way really is the road less travelled. Most people will choose the easy way over the hard way even if it’s a bad choice.

If we know the dangers of smoking and eating too much, why are there so many fat smokers? That line was inspired by David Maister and his excellent book, Strategy and the Fat Smoker.

Hope and positive thinking are not licenses to ignore reality.

If it’s important do it first.

People are not their jobs.

Instead of sending people to creativity classes, how about letting them come up with good ideas and try them, all without asking permission.

You probably don’t have to plan as much as you do, and you can put that time to better use.

The people who make things look hard are usually the ones who don’t understand.

Innovation begins with a problem to solve, not a desire to make millions.

Ease of use trumps sophistication every time.

The most innovative teams always push past the first good solution.