Lessons from the Great Depression for the Time of Coronavirus 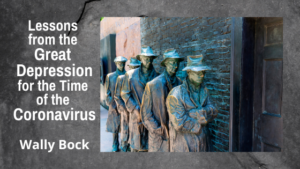 Western Omelette was a fixture in Colorado Springs for 28 years until 2:00 p.m. on March 29. My daughter, Diana, and her husband, Todd, always tried to eat there when they were on that side of the Springs. Di says they had the best green chili in town and the place was always packed. Now, it’s closed.

Only a month before they closed, Western Omelette employed 42 people. They closed because they couldn’t keep two people busy. Expenses continued to outrun revenue.

Western Omelette isn’t the only long-term family-owned business that’s closed because of the virus and may never reopen. This story is being repeated across the country as stores close and business shrivels up. To get a sense of the human cost, view this video announcing Western Omelette’s closing.

At some point, the medical aspects of the pandemic will be under control. The economic consequences will go on for a while.

We’ve Seen This Before

In the Great Depression, millions of businesses closed. One of them was my grandfather’s restaurant.

Like Western Omelette, my grandfather’s restaurant was successful. The family lived in a nice house. There were plans to send the four children to college. Then, the Depression came, people quit eating out, and the business failed. The family moved from that nice house into a third-floor walkup apartment. My grandfather got a job running dining service on the railroad. The kids rearranged their view of the future.

College was out, so the three older kids scrambled for jobs. The youngest, Jack, stayed in school. The family wanted to make sure he got his high school diploma.

It was unfair. It was wrong. And it happened to almost everyone. As Jay Powell, the current Chairman of the Federal Reserve, put it recently:

“None of us has the luxury of choosing our challenges; fate and history provide them for us. Our job is to meet the tests we are presented.”

You Do What You Must

You may despair and shake your fists at the sky. I know my mother did. But ultimately, you realize that you must keep going. As she said, “I realized the world wasn’t going to change, so I had better.”

Instead of planning for the future, you deal with what’s in front of you. You must keep going even though you don’t know whether or when it all will end.

The Old World Will Not Come Back

No matter what happens from then on, you will not look at the world the same way you did before. Things will never go back to the way they were. So, you keep doing.

My Uncle Pat took his drumsticks and went on the road with a jazz band. My mother went to work behind the candy counter at a Five and Dime. My Aunt Dot learned how to be a short-order cook. My Uncle Jack graduated from high school.

There’s No Way to Predict Any of It

When businesses like Western Omelette or my grandfather’s restaurant close, the world is different for the owners and for all the people who used to work at the restaurant. They all may go on to success, but the world will never be the same for them.

The world will not be the same for any of us when we are on the other side of the medical part of this challenge. We must do what’s in front of us. We must keep moving forward. We must find the opportunities that are there and seize them in a desperate grip.

Here’s how it turned out for my mother and her brothers and sister.

My Uncle Pat made a fine career in insurance. My mom married my father and became a pastor’s wife. My Aunt Dot became a great short-order cook. My Uncle Jack joined the Army Air Corps during the second World War, then used the GI Bill to go to college. He became a Lutheran pastor and the first full-time paid police chaplain in the United States. If you’re in Albuquerque, you’ll find the law enforcement building named for him.

The Big Lesson for Us from the Great Depression

Things will never go back to the way they were. We must keep doing with our head in swivel mode seeking new opportunities. Then we must seize them and make a future that’s different from what we dreamed of.