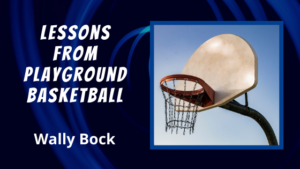 The playground basketball I played growing up was pickup basketball. Today, there’s the AAU and coaches and uniforms and referees. They play some games indoors. Back then, it was outdoor playgrounds, metal backboards and a chain net, if there was a net.

If you wanted to get as good as possible, you had to go where they played the best basketball. In New York, where I grew up in the early 60s, that meant you either went to Harlem or to Brooklyn. I chose Harlem.

I knew more of the guys there, from church league ball. We played a drive to the hoop kind of basketball that made my game such as it was, stand out. I played a lot of playground basketball. I learned a lot that still influences me.

I knew early on that I wasn’t ever going to be one of the best players on the court. I figured out, though, that if I played good defense, and made good passes, and set picks, I’d help the other guys win and they’d want me on the team. That’s how it worked out.

I got to play a lot because I was willing to be the hardworking non-star. But sometimes, that hard work wasn’t enough.

I remember the time I had to guard Pablo Robertson. Pablo was All-City and a star at DeWitt Clinton High School. Later, he took his fancy dribbling game to the Harlem Globetrotters. That day, it didn’t matter how hard I worked, I spent a lot of my time watching Pablo go by on his way to the basket.

Work hard. It’s the only way to be successful. You can beat people with more talent when you work hard. But you can’t beat them all. There are people out there with more talent than you and an unworldly work ethic. Think Michael Jordan.

Winning Gives You an Advantage

Maybe it’s not politically correct to say that. But if you win, you get advantages that you don’t get if you lose. Playground basketball enforced that idea. We played half-court. There were different numbers of points that you had to get to win. But it was always “winners out.”

If you scored, you immediately had an opportunity to score again. You had to keep the other team from scoring. Otherwise the other team could go on a run and you could lose without taking a shot.

Life is like that. If you win, you gain reputation and opportunity. If you don’t, you don’t. If you win you get the prizes.

If your team won, you got to play again. That was the real prize. Nobody much cared how many points you scored. There were no trophies. The prize was getting to play again.

It’s How You Play the Game

It was 1965 and I was walking through a concourse at the Chicago Airport. I was headed back to New York for leave before going to my next duty station. Suddenly, I heard a voice, “Hey, Flaco, are you a real Marine?”

It was one of the guys that I’d played ball with. He was wearing an Army uniform, on his way to the West Coast and on to Vietnam. My nickname on the playground was “Flaco,” which means “skinny.”

I was six feet tall and weighed about 130 pounds when we played together. In boot camp, I’d gained 25 solid pounds, and my friend kidded me about it. “Soon,” he said with a laugh, “you’ll be able to set a decent pick.” We all laughed. We talked about playing ball. He introduced me to his Army buddies. We talked about what was next for us. Then, we went off to catch our flights.

I think about that encounter a lot. What I remember from that time of playground basketball was doing things I loved to do with people who loved it too. Being called to on that concourse that day was an honor. Somebody who knew all about me thought I was worth calling over and introducing to his buddies.