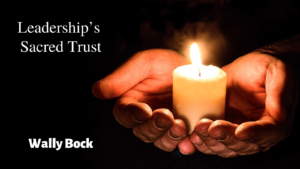 When Jeff Immelt was growing up, his father worked at GE Aircraft Engine. In an interview Immelt gave to Fast Company in 2005, he said that he never knew who the CEO of GE was. But he always knew his dad’s boss. The interviewer asked him if his dad’s boss had an impact on home life. Here’s what Jeff Immelt said:

“Yeah. He came home in a bad mood, uncertain about the future. And when he had a good boss, he was pumped.”

You can read a lot of statistics about the influence of a person’s immediate boss on productivity and morale. Those are insightful, but everything you need to know about the effect of leadership is contained in that quote.

When you accept the position of leadership, you will touch lives. That is leadership’s sacred trust. You are called to care for those lives and try to improve them.

Here are some thoughts about how to live up to that sacred trust.

Let Them be Human

Work is only part of the lives of your teammates. Don’t be surprised when another part of their life is more important than work for a while.

People are emotional. People make mistakes. You job is not to turn them into paragons of consistent efficiency. It is to help them become productive human beings.

People deserve to be treated fairly, but sometimes that’s lost in the hurly-burly of day-to-day work. When you lead, it’s your responsibility to treat people fairly.

Help your teammates get better at the job they have today. Help them develop competence and confidence.

Help them prepare for what’s next, too. Let them define what’s next, whether it’s within your organization or somewhere else.

Help Them Become Part of Something Bigger Than They Are

Tell your teammates as a group and individually why what they do is important. Don’t expect them to automatically know why. Don’t think it doesn’t matter if they have “a good work ethic.”

Help your teammates be good teammates. It’s when teammates are pitching in to help each other that teams become most effective.

People want to make as many decisions as possible about their own work life. Let them do that.

Don’t stop there. Make sure they have the resources they need. Ask them how things are going. Ask how you can help.

When you lead, your example is more powerful than you realize. If you want honesty, tell the truth. Work hard and they’re likely to work hard. Take responsibility, and so will they. Seek to fix problems instead of blame, and they’ll do it too.

No one’s likely to thank you for the good work you do. That’s why you must be sure, yourself, that you’re living up to the sacred trust. But every now and then, you get a whiff of what you’ve accomplished.

About a decade ago, I was contacted by a woman who’d worked for me 15 years before, while she was still in college. She thanked me for all I did for her, but honestly, I couldn’t recall anything specific. When she shared some specifics, this was one of them:

“I think the most important thing I picked up working for you was that working hard was a good thing and that you could have fun at work. My father hated work and complained about it all the time. You expected people to work hard and take responsibility and help each other out. It was a whole new world for me.”

I assure you that not everyone who worked for me would say the same kinds of laudatory things. That’s another truth about the sacred trust of leadership. No matter what you do or how you do it, some people will not like it or you.

It must be enough for you to go home at night knowing that you touched people’s lives and lived up to the sacred trust of leadership.

Leadership is a sacred trust because you effect people’s lives.

Let your teammates be human.

Help your teammates become part of something bigger than they are.

Give your teammates as much control as possible over their work life.

I read this and applied it to myself and thought you might gain something from it as well.

Those are key points of being effective in a powerful leadership. Let’s face it leadership is one component but powerful is attached to it because it improves and implements to a higher standard being established leading towards long-term good success and support. Effective tools to use in today’s technology of thinking.