Has the Word “Leader” Lost Its Meaning? 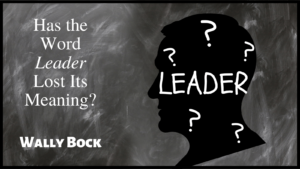 When I was a boy, I loved the Landmark books about history. I thought the best ones were biographies of leaders. In those days, “leader” was a noun with a straightforward meaning. A leader was someone who had followers who all worked together.

Many leaders were appointed. They were military officers or elected officials or business executives. Others were a little less formal, like “The Leader of The Pack” the Shangri-Las sang about.

That’s changed now. I think the change may have started in 1978 when James MacGregor Burns wrote his book Leadership. Burns said people like Adolf Hitler were not leaders because they were evil. Leadership wasn’t just having followers and working together for something. For Burns, it was also a judgement about the morality of a leader’s actions. Moral actors could be “leaders.” Evil actors could not be.

“Leader” Has Become an Opinion

When leader was a noun, we knew what it meant. But when leader became a moral judgement, it was an opinion. Opinions are great. But they don’t tell us anything about the leader, only what another person thinks about the “leader.”

In some cases, a leader is a person with influence. We talk about thought leaders. We describe people who are leaders without position.

For some people, leaders are superior people. We talk about authentic leaders and true leaders.

For others, leaders are much the same as the way Burns thought about them. In this sense, real leaders don’t just have followers working toward a goal, but they’re a force for good.

The Genie Won’t Go Back in The Bottle

No blog post or battalion of blog posts will take things back to what they were. I have no desire to return to those thrilling days of yesteryear.

The problem is that it’s easy to get caught up in the discussions of true and authentic and real leaders and lose sight of doing leadership work. The discussions are great, but they only nibble at the edge of effectiveness.

If you want to be an effective leader, you must get the basics right. Pay attention to your leadership work and not to leadership labels.

The core of leadership is leadership work. Concentrate on becoming a leader who does the job well and not a leader with an adjective in front.

Leaders have two kinds of work. One is to accomplish the mission, whatever it is, through the team. When you do this job, you set direction and maintain momentum. You help people use their strengths and make their weaknesses irrelevant as you work toward a common goal.

You must master yourself and a host of skills to do leadership work well.

Our language is not likely to change back.

Leaders are people who do leadership work.

Leadership work is helping the team and team members succeed.

You must master yourself and a host of skills to lead well.