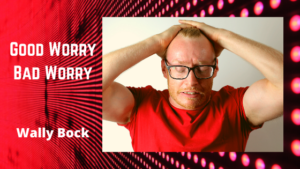 I looked up the word “worry” in the dictionary. It said: “Give way to anxiety or unease; allow one’s mind to dwell on difficulty or troubles.” There were synonyms, too. They included fret, agonize, brood, panic, lose sleep, and get worked up. Not a positive thought in the bunch. But worry is not all bad and not all worry is bad.

There’s good news about bad worry. You don’t have to put up with it.

All-or-nothing thinking causes worry. That’s seeing everything in black and white. Look for the gray areas.

Dwight Eisenhower had one of the exemplary lives in American history. He used worry to sharpen his thinking. Here’s how he did it.

In June 1944, one of Eisenhower’s biggest challenges was to decide when to release the troops and set D-Day in motion. He thought through the issue, starting with a memo he wrote to himself with the subject “Worries of a Commander.”

For days, the weather had not been good enough to launch the planes and the ships loaded with troops. As he worked his way through his worries, Eisenhower set some aside for another day. He eliminated others because they were not important or urgent.

General Eisenhower determined the most important thing was the decision whether to set the invasion in motion. Then, he worked his way to a decision rule. It was: “We must go unless there is a real and very serious deterioration in the weather.” That was the rule that guided his thinking when he gave the go order and launched the D-Day invasion.

Eisenhower used worry for good to sharpen his thinking, identify key issues, and figure out how to handle them. Another famous American, Sam Walton, used worry differently for good.

Good Worry can Drive Your Search for Solutions

For Walton, the explosive growth of Walmart was amazing and gratifying. It was also worrying. Walton worried about maintaining the values that made Walmart successful as the company grew. He wanted Walmart to change in ways that made progress, but he wanted the core values to remain the same after he was gone.

That worry guided him as he chose people to be key executives. It influenced his emphasis on daily rituals and training.

Walton wasn’t trying to sharpen his thinking, like Eisenhower. Instead, he used his worry about maintaining Walmart’s values to drive a search for ideas and actions he could take.

When worry is keeping you up or keeping you from acting, neutralize the worry in a way that works for you. Focus your attention on what you can influence and what actions you can take.

Use worry to clarify your thinking, like Dwight Eisenhower. Work through your worries until the path for action becomes clear.

Use worry to drive your search for solutions, like Sam Walton.

Breaking down worry into the fear-stopping kind from the sharpen-my-thinking form seems brilliant.

Thanks, David. I can’t take credit for the idea, though. I’d give it to Eisenhower. The thinking in this post started with his “Worries of a Commander” memos to himself.