Doing The Most Important Thing 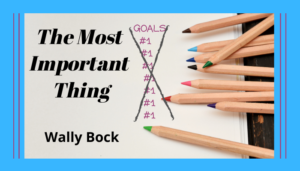 Many years ago, I accepted an invitation to join the board of a nonprofit. My first meeting was an eye-opener.

A couple of months before, the board engaged a consultant and conducted a two-day offsite planning session. The board members identified the most important things the organization should do. My first meeting was the meeting when we reviewed the product of that weekend.

The board had identified the most important things the organization should do. There they were, on the easel paper, 104 of them.

I laughed about that for years. Imagine, 104 most important things. That was silly. Then, I realized that I was doing the same thing.

Part of the problem is with that word “priorities” It’s a new invention. The word “priority” entered the English language sometime in the 14th century. For the next 600 years “priority” was singular. “Priority” meant the most important thing. You could only have one priority.

Then, around 1940, the word “priorities” appeared. Around 1960, “priorities” started a steep climb in popularity to where it stands today.

The Most Important Thing

If you want to get more done, banish the word “priorities” from your vocabulary. Use the singular form.

One priority means one most important thing. That’s the thing you need to do.

But I Have Lots of Important Things!

Most of us have lots of things that we need to do. But we can only have one most important thing at any given time. Just one.

Pick Your Most Important Thing

You may have a clear idea of what you want to accomplish in the next 90 days. Look at all the things that you want to do. Then pick the mostimportant thing. That’s your priority.

If It’s Important, Do It First

Essentialism: The Disciplined Pursuit of Less by Greg McKeown

Winning Well: A Manager’s Guide to Getting Results—Without Losing Your Soul by Karin Hurt and David Dye

I liked this article.