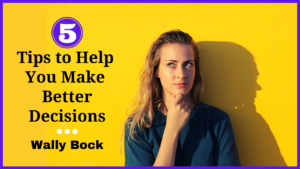 Lee was a great athlete who played three sports in high school. The sport he was best at was probably baseball. When he graduated, the Brooklyn Dodgers offered him a signing bonus. He wanted to play for them. His father said no.

Lee’s father, Alessandro, came to the United States at age 15 with a 2nd grade education. He worked all his life as a laborer laying terrazzo floors. It was hard, hot work in Miami. But he reveled in the fact that, in America, his son could go to college. That’s what Lee did.

Lee was Lee Corso. He went to Florida State, where he played football and roomed with Burt Reynolds. He had a career as a coach and then as a football analyst on television. He’s been part of ESPN’s Saturday GameDay college football show since it began in 1987.

Even Lee Corso’s fans may not have known about the baseball offer and rooming with Burt Reynolds. But they’re almost sure to know his classic tagline from the GameDay show: “Not so fast, my friend.”

Many a decision-making meeting I’ve been to would have benefited by having Coach Corso in the room. Over half a century in business, I’ve seen too much jumping to a decision without defining the issue. I’ve watched teams make decisions without considering any alternatives. And I’ve watched them make decisions they didn’t have to make at all.

Here are five tips based on what I’ve seen that will help you make better decisions.

The first basic decision question is: “Why is a decision needed?” It’s astounding how many times you don’t need to make a decision.  Always ask, “Do we really have to do this?”

The next question is: “What’s the deadline?” Business leaders I’ve seen seem to believe that fast decision-making is good decision-making. Sometimes, it is. Many times, it’s not. So, before you get into the hurly-burly of decision-making, figure out what your deadline is.

Ask: “Who should make this decision?” Identify who has a stake in the outcome. Identify who’s got the best expertise or perspective to deal with the decision. Often, it won’t be you. Pass it on.

Get the Stories of The Issue

Once you know you must decide and how long you’ve got, start figuring out what the issue really is. The best way I’ve found to do that is to get the stories of the issue.

Have each team member tell their story of the issue. They’ll bring up some facts and dates. Take notes. Construct a timeline.

Stories are great for figuring out what an issue really is. Human beings have used stories to convey important information since we first began to use language. When people tell you their story of the issue, you’ll get a collection of different facts and dates for your timeline. People will also share their opinions and biases.

Another reason to get the stories of the issue relates to a different facet of human nature.

One of the classic films of all time is “Rashomon,” directed by Akira Kurosawa. In that movie, several different people, all involved in the same incident, tell their story of what happened. All the stories are different. That’s the way human beings do it. Sometimes, we shade the story to make a point we want to make. Sometimes, we don’t remember things exactly. Sometimes we fiddle with the facts because we’re scared or because we want credit. Whatever the case, you’ll benefit by getting all the stories of the issue you can.

Sort Out What You Know and Don’t Know

Take some time to figure out the knowns and the unknowns. Don’t be surprised if there’s disagreement on whether a particular “fact” is known or not. For each fact presented as known, ask how you know it.

In addition to some disputed items, some things listed as known may merely be presumed. You’ll have to verify them.

What don’t you know that you would like to know to make a good decision? This is a useful list to put together even if you may not have the time or the resources to answer all the questions.

Ask what you should find out if you can. You may be limited by time, budget, or expertise.

You’ll make better decisions if you have more than just a couple of options. One of your options should always be “We don’t have to do anything.” After that, don’t move on unless you have at least three alternatives.

As you start to consider options, flesh out each one. For each option, decide who would be responsible, what they must do, and what the deadlines are.

Civil but spirited disagreement is one of the best ways to make good decisions. Disagreement brings out points that won’t come up any other way. I’ll illustrate the importance with a well-known anecdote.

When Alfred Sloan was the head of General Motors, he came to the end of a senior executive session and began to sum up the meeting.

“Gentlemen, I take it we are all in complete agreement on the decision here,” he stated. Heads nodded affirmatively all around the table. “Then,” Sloan went on, “I propose we postpone further discussion of this matter until the next meeting, to give ourselves time to develop disagreement and perhaps gain some understanding of what the decision is all about.”

When you’re starting to come to a decision, pause for a moment or two. Check your head and check your gut.

Check your gut, too. Your gut instinct often perceives things that you can’t articulate. If your gut feels good about the decision, great. But if your gut screams “No!!” figure out why.

Decide if you need a decision and who should make it.

You don’t need to make every decision quickly.

Get the stories of the issue.

Sort out what you know, don’t know, and presume.

Consider the option of “no action needed” and at least two more.

Spirited, but civil disagreement is good.

Check your head and check your gut.