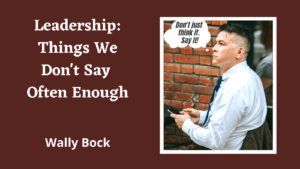 If James Pennebaker is right, you and I say about 16,000 words every day. Some of that is necessary and urgent conversation like, “Where’s the bathroom?” But most of what we say isn’t urgent and isn’t necessary. There are things we could say that would make things better, but we don’t say them enough. Here are suggestions about things you should say more.

Every day, people do things for us. Some are big and important, and others aren’t, but they all deserve a thank-you. Thank the people on your team for their work, for their efforts, and for the ways they support each other. Don’t just think it. Say it.

No gets a bad rap. We call people who use the word “no” “uncooperative,” or “negative.”

The word no is a power tool for some of the world’s most productive people. Remember this: saying no to one thing means you can say yes to something else. No lets you weed out the inconsequential and harmful, so you can make space for better things. Don’t just think it. Say it.

Tell Me If I Understand What You Said

Effective oral communication only looks easy. Getting a message from one brain to another is very hard to do well. It’s almost impossible to do well if you or your conversation partner assume you understand what the other person means. Check your understanding by telling your partner, in your own words, what you think they said. Don’t just think it. Say it.

Praise the things you want to encourage and continue. Praise is a power tool in your boss’s toolkit. Legitimate praise, honestly delivered, and close to the activity you’re praising, will help improve both performance and morale. Don’t just think it. Say it.

When you or any of your team members gets an idea that might be good, try it out. Experiments are how you find what works and make things better. You won’t get things right the first time, or maybe even the second or third. Experiments, trying things, drives progress. So, get the ball rolling by trying something. Don’t just think it. Say it.

Please Don’t Do That

It happens every day. People say things you think are wrong, or that make you uncomfortable. If it’s important, don’t let it pass. Tell the other person what bothers you and why. Then work together to figure out how to make things better. No one will know about an issue, or be able to work to make it better, unless you tell them. Don’t just think it. Say it.

Choose your 16,000 words wisely. Use some of them to improve performance, psychological safety, and morale. Don’t keep important stuff in your head. Say it.

thought of us when I read this article!

HI Karen – I got this article today and want to share with you!
RG

I think we should say “I love you” more to our spouses and children.

I no not say thank you or job well done as much as I should. I just exspect my employee’s to perform at a very high level. But I am weak in giving them praise.

Thank you, great thoughts and reminder.