Why are there so many bad bosses? 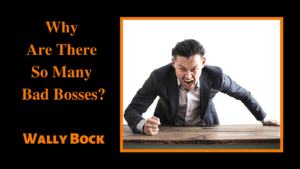 “Boss” is a loaded term for many people, but I think it’s the best term to describe a person who is responsible for the performance and care of a group. It’s a job. Many of the people who have that job don’t seem to be doing it very well.

How Many Bad Bosses Are There?

Popular wisdom has it that there are an awful lot of bad bosses. It’s hard to have a conversation about life at work without hearing at least a few bad boss stories. Alas, research supports the popular wisdom.

Here’s one example. In 2008, psychologist Dr. Gordon Curphy conducted an internet survey of 245 employed adults. He asked them how many bosses they’d had and how many of those bosses they’d want to work for again. Survey participants said that only 38 percent of their bosses were that good.

That’s research, but it’s not exactly scientific. So, let’s look at something else. Researchers Joyce Hogan, Robert Hogan, and Robert B. Kaiser reviewed 12 studies published in peer reviewed journals between 1985 and 2005 to assess the percentage of management failure. The failure rates in the 12 studies ranged from 30 percent to 60 percent. The average was about 50 percent. Let’s put that in plain English.

Imagine some guy looking at himself in the mirror as he shaves in the morning. He thinks to himself, “I’m going to be an awful boss today and have a great time doing it!”

Not likely, is it? Nobody sets out to be a bad boss any more than they set out to be a bad parent or a poor teacher. So, why are there so many bad bosses? I think the reasons fall into two groups: system issues and personal issues.

How Our Systems Create Bad Bosses

Companies don’t mean to do it, but many of our basic systems almost guarantee that we’re going to have a significant number of poor-performing bosses. That begins when we select people for the job.

We tend to promote people based on their performance in another job rather than their aptitude for the specific work of being a boss. Or we assume that intelligence is enough and promote smart people because we think they’ll be able to figure it out.

To make matters worse, we make the move from individual contributor to boss a “promotion.” It means more money and, usually, more prestige. So, people who might not want to do the job otherwise become a boss so they’ll do better financially. And, once we “promote” a person to a boss’s job, we make it almost impossible for him or her to return to individual contributor status.

In too many cases, we supervise bosses poorly. We reward them for making their numbers, but often not for helping their people grow and develop. So, guess what? Bosses spend their time trying to make their numbers at almost any cost and ignore the developmental aspects of their job.

We don’t support bosses well, either, especially in the most critical time. That time is when they’re making the transition from individual contributor to boss. Instead of providing peer support, training, and coaching for the one-and-a-half to two years it will take for a new boss to learn the job, we make due with some multi-day training and exhortations to do well.

Those are just a few ways that our systems work to create too many bad bosses. Some of the bosses have individual problems, too.

If you want to learn to do any job well, you need a robust mental model of what good performance looks like. Too many new bosses don’t have that. Because we don’t help them develop that model, they make do with what they have.

First bosses play a critical role here. If their first boss was good, they’ve got a better shot at becoming a good boss themselves.

Failing the experience of a good boss, a new boss can get guidance from role models and mentors. The problem is that many new bosses don’t know how to develop good role models or acquire good mentors.

Probably half the bosses out there aren’t doing a good job. If we want to change that, we need to change the way we select, train, and support bosses, especially during their critical transition from individual contributor to boss. We need to help new bosses develop healthy and robust mental models of what good supervision looks like and teach them how to choose role models and acquire mentors that will help them grow.

Excellent article, puts clear concepts, reasons and solutions in just few lines. Congratulations and thank you so much for sharing wisdom

Thank you for those kind words, Felipe

You nailed it with this article. Companies always want to train salespeople so that they will sell more but no one wants to train sales managers. If they trained sales managers first, you may not even need additional training for salespeople. I don’t understand why more companies don’t see this. Great article.

Well said, Dave. Thanks for adding to the conversation.

Hello Megan – I read this article and thought I’d pass it along. It made me think of the various supervisors you mentioned were good vs. not so good. As you now are in the ‘boss’ role, think this provides helpful reminders about how your direct reports may ‘see you’ and how best you might support them. jkw

Sadly, we’ve know this for so long. I remember studying it in business undergrad in the 1970s then seeing it up close in the early 80s. You’d think we could break the cycle! Hats off to all the good and great bosses I’ve had.

I share your “hats off” sentiment. I had the opportunity to study and spend time with many excellent bosses and they truly make a difference. Thanks for adding to the conversation.

My percentage was significantly lower. I rate four of my 20+ bosses I would want to work for again. More importantly, I recognize how I was not prepared to be a good boss. Managers orf people should not have to learn on the job!

Thanks, Styron. I would push back on one point. I think that the only way to learn to be a manager is on the job. The challenge is to choose people who are are likely to succeed, prepare them, and then support them as they assume their new career.

thank you for those kind words.

Makes a lot of sense to me. How might this wisdom be implemented in a school system to foster the development and growth of leaders at all levels.

I don’t have enough knowledge of the workings of a school system to be specific. But I will say that I really admire great bosses in the public sector. Often they’re hemmed in by the bureaucracy and lack some of the tools that their private sector colleagues have and yet, still, they do amazing work.

Agree. Good article. But it’s higher bosses that pick the wrong people to begin with. Pick people who are abusive or poor communicators or their friends or loyal too or owe them one or top trader. Last people you would say are a role model. It starts with selection. Thx .

I agree that the process starts with selection, but the issue starts with modeling the behavior you want. That’s the first job of “higher bosses” IMHO

Thanks for this great piece. Another model that new and “unmentored” supervisors may copy is their family of origin models for communication and dealing with conflict–for the same reason–it’s what they know. These family models may, in fact, be quite destructive and dysfunctional.

Wow. Yes. Great addition to the discussion. It was very much an issue for me in my early career.

A point well made, the need for mentors is undeniable and we need to seriously look at this to guide leaders and bosses of the future

Awesome article! Great research to back up this problem. I believe there are “coaches” and “umpires” as bosses. This also points to that construct. All the best.

Thanks for the kind words, Jay. I like the distinction between “coaches” and “umpires.”