Nobody starts out to be a bad boss 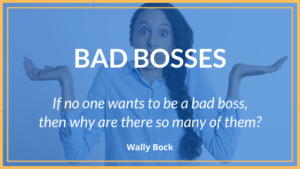 Nobody gets up in the morning and decides they’re going to go into work and be the worst boss on the planet. So, why are there so many bad bosses?

Depending on the research you read, between 1/2 and 2/3 of all bosses are ineffective. Most of them aren’t mean, or abusive, they’re just bad at the job. That research was done a few years ago, but I don’t think things have changed much. It’s the system, silly.

Bosses are people who are officially responsible for the performance of a group. We expect them to accomplish a mission through the group and care for group members.

Alas, we promote people who give no evidence that they have the skills to do that job or have any desire to do it. You wouldn’t hire someone as an accountant because he or she was a good plumber. But we do that all the time with bosses. We promote people to group responsibility because they’re good at something else. That something else might be making sales, designing marketing campaigns, or writing code. It usually doesn’t include the things we want bosses to do.

You might ask, “Why do people take a position they don’t want and probably won’t be good at?”

That answer’s simple. In too many companies, becoming a boss is the only way that you can get more money and prestige. If it’s the only route available, people will take it.

We could fix this easily. Allow people who might become bosses to try on the job in a temporary assignment. That way the company learns who has the aptitude and desire for a boss’s job. And people learn whether they’ll enjoy the work.

Great. We give bunch of people a job they have no aptitude or desire for. We call it a promotion, but it’s more like a career change. What do we do next?

We compound the problem. Once you become a boss in most companies, you can’t go back to being an individual contributor. You’re stuck. For the rest of your career, you’re going to be miserable doing a bad job that affects the lives and productivity of dozens of people.

Then we compound the problem one more time. We dump people into that new career without much training or support.

We build up our mental model of what a good boss is by experiencing a good boss. Too many people who get promoted haven’t had one. They have no idea what it’s like to be a good boss or how different it is to be on a team with a good team leader.

This is a chicken and egg problem. You need good bosses to set the example and help others imagine what being a good boss is like. And you can’t use the negative examples of bad bosses. Bad bosses may teach you what not to do, but they can’t teach you what to do instead.

You want bosses who are coaches, mentors, and encouragers of people who want to do a similar job. That means training bosses in coaching and development skills. It means tying some of their compensation to the work they do developing people. It means basing their promotion, in part, on how effective they are developing good leaders.

The Transition is Critical

We must provide special support during the two years from the time a person is promoted. That means readily available materials, coaching, and coursework.

Deliver training in small bites not a three-day program that covers everything. Deliver training before a person assumes the job, not six months later. By then he or she has developed a bunch of bad habits. Supplement with coaching to transfer skills from the classroom to the workflow.

New bosses will come back from training with a head filled with good ideas about what to do. Then, those ideas slam into reality. Doing is a lot harder than knowing.

That’s when coaching is vital. They need to learn in small, doable steps that build confidence. The best place to get that is from their boss, who’s also a great coach.

We have a system in most companies designed to produce too many ineffective bosses. We need to fix the system. Meantime pay special attention to coaching. Give potential leaders some experience of the job before they accept it. We can make sure the bosses we have understand new leader development as part of their job and have the skills to do it. We need to remove leaders who aren’t effective, so they don’t continue to affect performance and morale.